Computational modeling of the FSW process involves an intense treatment of the thin region in the vicinity of the tool-work interface. FSW model complexity lies not in the geometry or kinematics of the tool, but in the mechanisms by which a weld is created in the work material. The material flow is limited to the region enveloping the tool and process variables in this region are coupled in a manner which excludes an independent treatment. Viscosity, for example, is strongly dependent on temperature and strain rate; which are themselves dependent on the frictional condition at the interface. The frictional condition at the interface is however highly dependent on material viscosity, creating a closed loop relationship. Viscous heating (or plastic dissipation) and frictional heating at or near the tool surface produce steep temperature gradients in both the work material and the tool itself near their interface. The steep process variable gradients in this region are contrasted with the lack of such gradients throughout the remainder of an FSW model. 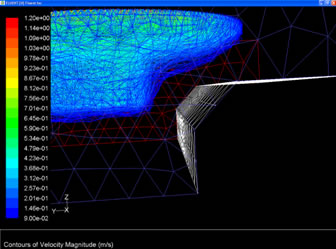 The conical tool design is potentially a simple solution to the problem of closure welding. According to Trapp, Fischer, and Bernath of the Edison Welding Institute(ESI) in U.S. Patent #72346262, the appropriate cone included angle can contain weld material regardless of cone penetration depth and during cone tapered retraction. The conical tool in conjunction with the tapered retraction procedure could therefore be used to weld closed contours such as cylinders and spheres without leaving a defect where the tool exits the material. The conical tool can furthermore be used for in-process adjustment of penetration depth (i.e. variable thicknesses welds.) The conical tool design is especially attractive because it is very simple and durable design. The conical tool is potentially a simple and elegant solution to the seemingly complex problem closure welding in FSW. The current solution is an exceedingly complex, hydraulically actuated retractable pin tool apparatus1.

The eularian, finite volume, CFD solver Fluent was used with the implicit formulation. The weld material viscosity function was set by user-defined function and defined according to the visco-plastic model. Material viscosity was thus established via an inverse hyperbolic sine function of the local strain rate magnitude and absolute temperature. The total heat input was calculated via the weld power method:
Power = Weld Moment * Radial Velocity; or P = (Î©)*(Ï). Units: W=(NÎm)*(rad./sec.)
Weld moment was found experimentally via a rotating cutting force dynamometer and the spindle speed setting was verified by optical interrupters. This calculated total heat input was then applied in the model at the tool-material interface via a user-defined function which varies heat input over the tool surface according
to the local tangential velocity magnitude. Heat input is therefore highest near the material surface and zero at the probe tip (varying in a linear fashion between) with the total heat input equal to the weld power. A variable slip shear condition was set at the weld interface. The tool rotational velocity was set to %70 of the experimental parameter and a pure stick condition was used. This simple boundary condition was used because the actual relationship is unknown and unwarranted complexity is not desired in the model. 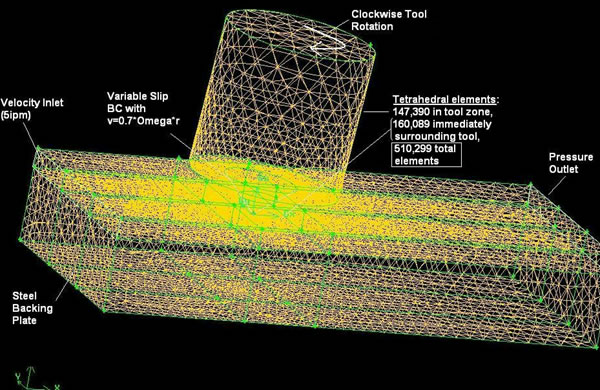 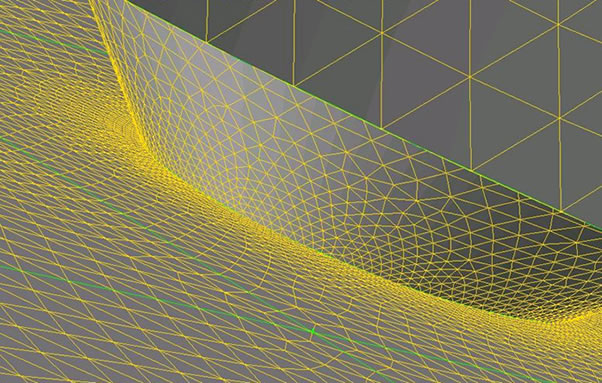 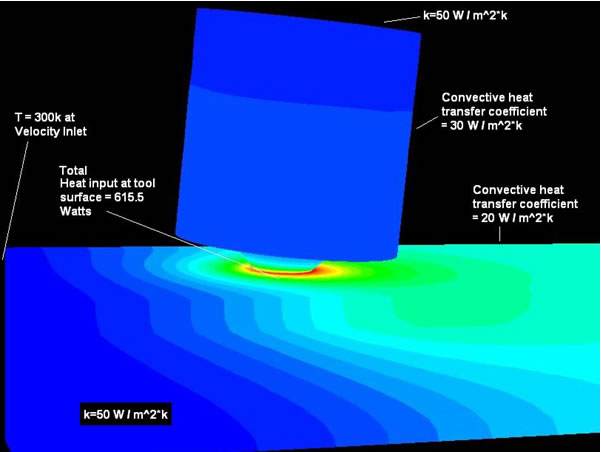 Below: Model thermal contours are compared with thermal camera images. 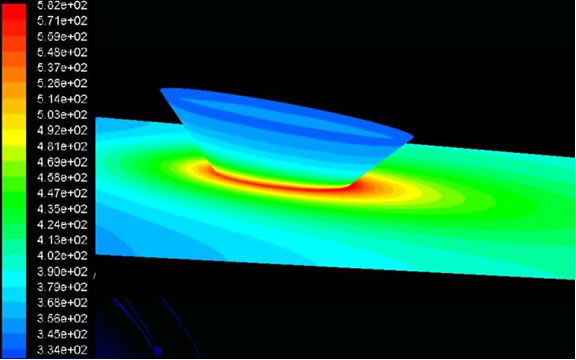