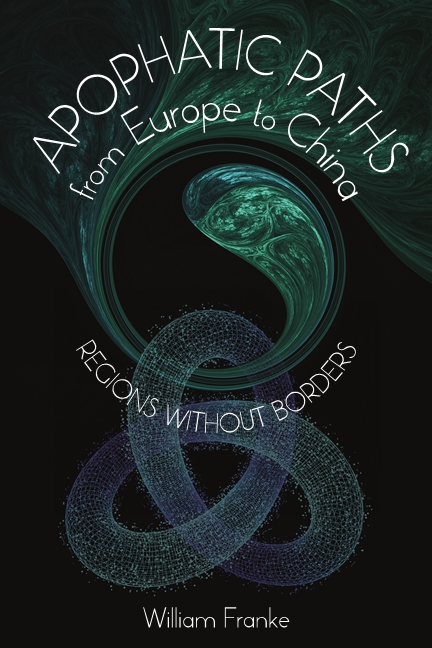 ââ¦Franke has made a great contribution, perhaps as great as a paradigmatic shift, to the area of Western-Chinese comparative philosophical and theological study, especially regarding the topic of transcendence versus immanence. The promising comparative framework that he sets in the book incubates a great potential for scholarsâ further exploration, and we therefore have good reason to wish for considerable growth of scholarship in this area.â â Journal of the American Academy of Religion

An encounter between Frankeâs philosophy of the unsayable and Eastern apophatic wisdom in the domains of poetry, thought, and culture.

In Apophatic Paths from Europe to China, William Franke brings his original philosophy of the unsayable, previously developed from Western sources such as ancient Neoplatonism, medieval mysticism, and postmodern negative theology, into dialogue with Eastern traditions of thought. In particular, he compares the Daoist Way of Chinese wisdom with Western apophatic thought that likewise pivots on recognizing the nonexistent, the unthinkable, and the unsayable. Leveraging FranÃ§ois Jullienâs exegesis of the Chinese classicsâ challenge to rethink the very basis of life and consciousness, Franke proposes negative theology as an analogue to the Chinese model of thought, which has long been recognized for its special attunement to silence at the limits of language. Crucial to Frankeâs agenda is the endeavor to discern and renew the claim of universality, rethought and reconfigured within the predicament of philosophy today considered specifically as a cultural or, more exactly, intercultural predicament.

“â¦Franke has made a great contribution, perhaps as great as a paradigmatic shift, to the area of Western-Chinese comparative philosophical and theological study, especially regarding the topic of transcendence versus immanence. The promising comparative framework that he sets in the book incubates a great potential for scholars’ further exploration, and we therefore have good reason to wish for considerable growth of scholarship in this area. ” âÂ Journal of the American Academy of Religion

âFranke rethinks East-West philosophical traditions to show the subcurrents in Western thought that correspond to the centrality of apophasis in Chinese and Asian thought, whether it be the empty transcendent or the Way as indicator or allusion. He shows how apophatic thought confounds the transcendent-immanent duality and reworks it into an inseparability that can be consequential for our philosophical understanding of a ânaturalâ universality.â â Prasenjit Duara, author of The Crisis of Global Modernity: Asian Traditions and a Sustainable Future

âThe broad coverage of William Frankeâs book is impressive as it discusses many issues in philosophy, religion, and literature, but at the same time it also has a clear focus and a special âapophaticâ approach to the various issues in the humanities. It is innovative, creative, and makes an important contribution to East-West comparative studies and cross-cultural understanding. Highly recommended.â â Zhang Longxi, author of From Comparison to World Literature

âBy highlighting Western phenomena that are comparable to the Chinese, mainly in the apophatic tradition, Franke succeeds in exposing the biases and blind spots in Jullienâs as well as in Hallâs and Amesâs respective treatment of Chinese âphilosophy.â This book will stand as an important resource for the future of scholarly debates in these areas.â â Karl-Heinz Pohl, editor of Chinese Thought in a Global Context: A Dialogue Between Chinese and Western Philosophical Approaches

“What makes Franke’s work notable is the considerable daring in putting the apophatic at the very centre of an intercultural hermeneutics that builds a bridge of communication and understanding between peoples and minds via the unsayable. There is a rich dose of inescapable irony in this projectâFranke speaks volumes about that which cannot be spoken, labouring in fact to erect, as he describes it, an ‘intercultural philosophy of universalism’ (p. xvii) that traverses and transcends terrains East and West . . . . The parts do add up to a coherent sum, on account of Franke’s strong and cogent thesis of the possibility and desirability of transcultural pathways toward a truly globalized space that discloses ‘what is working inÂ any and allÂ culturesÂ beyondÂ their borders and definitions and irrespective of their specific characters’ (p. xx, original emphasis). Theology, or negative theological interpretation, as Franke contends, is the central conduit among these pathways, insofar as theology relates us to an Other (a Whole / an All) that nonetheless mandates our negation; it presumes the relativity of humanity by bringing it into the realm of transcendence, thereby dissolving normal standards and measures. . . .Â Franke has proferred us an innovative account of apophasisÂ  as a universal basis of an intercultural philosophy. Judging it from the perspective of comparative study, I find little fault with it. Indeed, we should be thankful that new light is shed on the commonly known fact of and argument about the All/Whole/One/Nature as unutterable in Chinese thought thanks to Franke’s deep knowledge of apophatic ideas.”Â  âÂ On-Cho Ng,Â Zhongguo wen hua yan jiu suo xue baoÂ 68 (2019): 285-90Â Â Xé¦æ¸¯ä¸­æå¤§å­¸ä¸­åæåç¡ç©¶æå­¸å ± =Â Zhong wen da xue Zhongguo wen hua yan jiu suo xue baoÂ =Â The Journal of the Institute of Chinese Studies of the Chinese University of Hong Kong

Review and Response in Reading Religion: A Publication of the American Academy of Religion

Relevant Lectures presenting the Intercultural Philosophy propounded by this book: 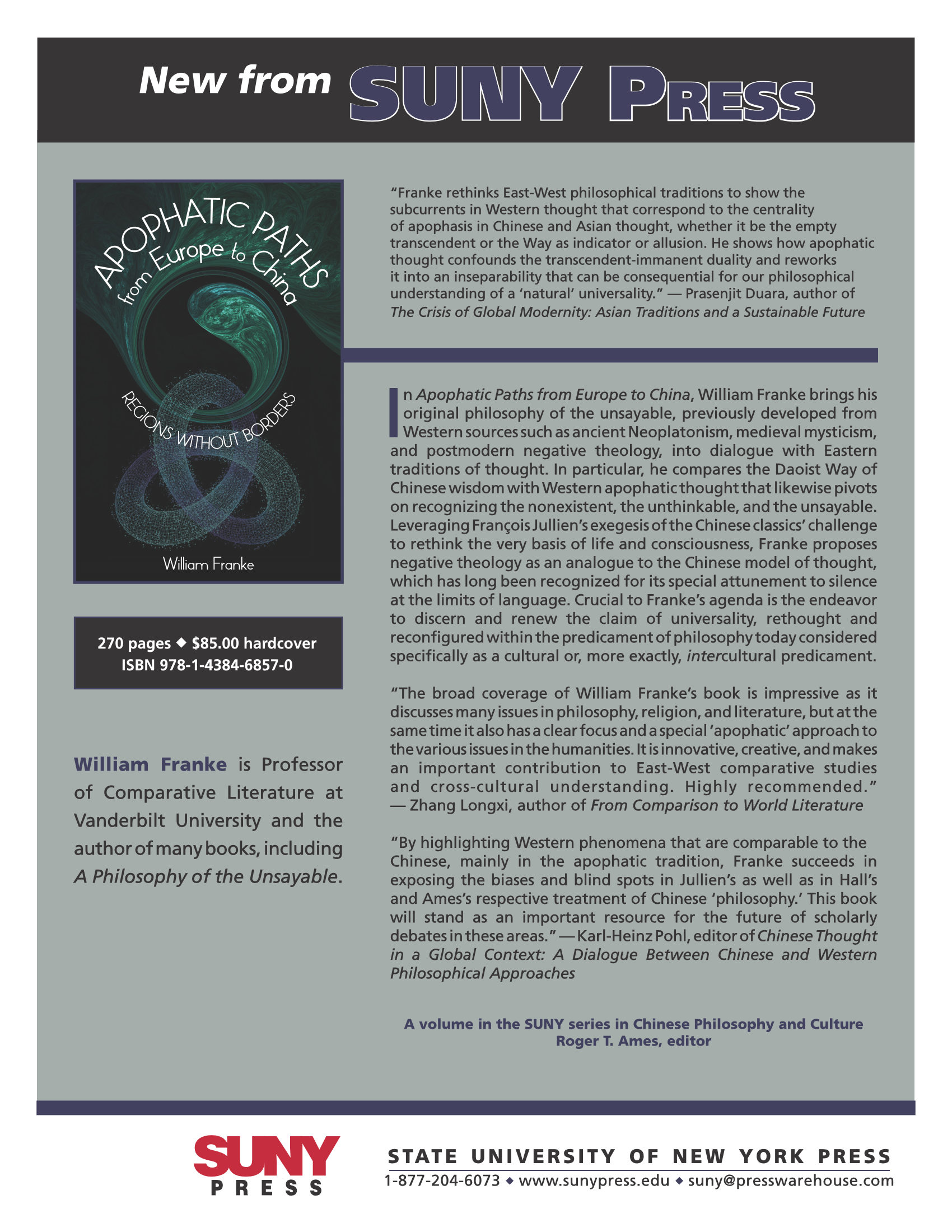 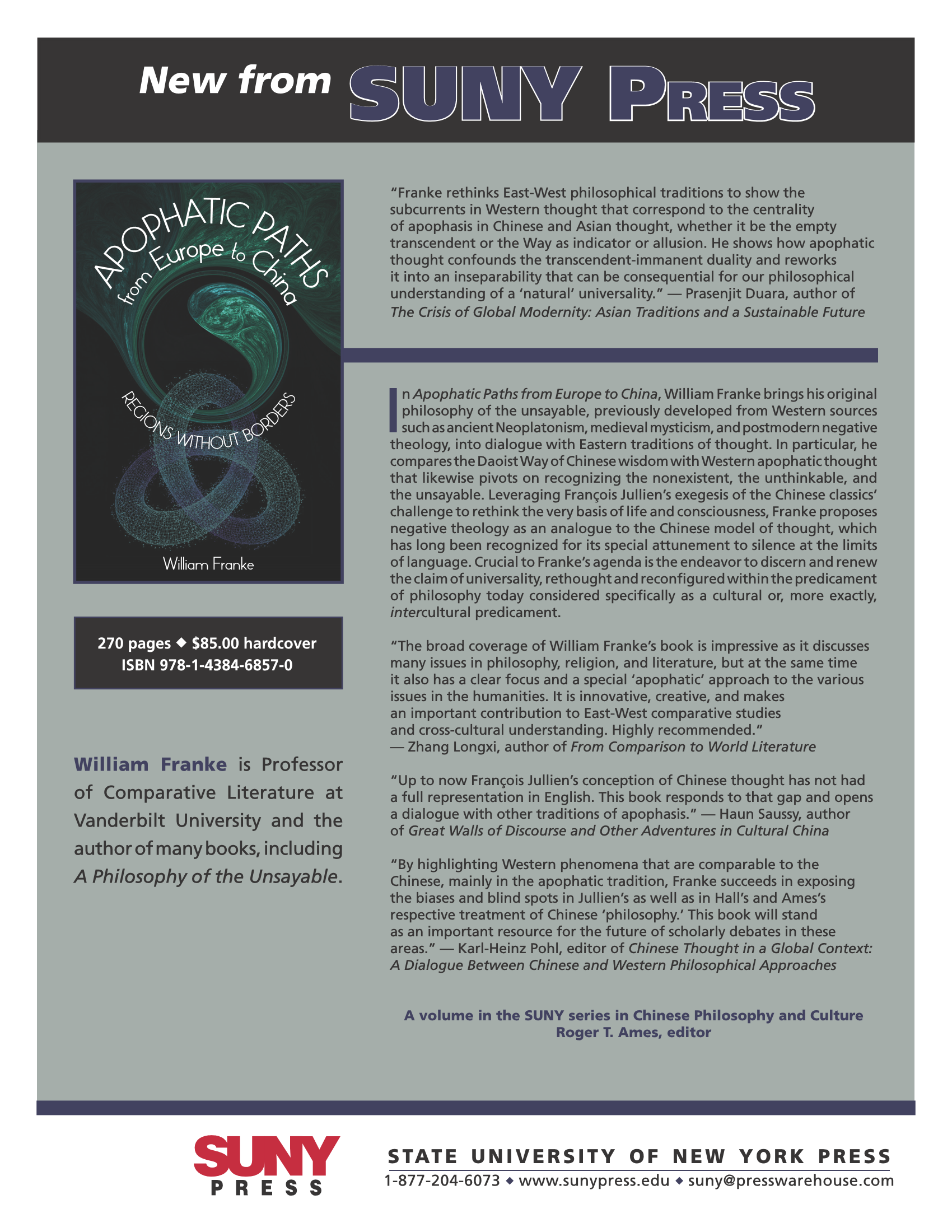 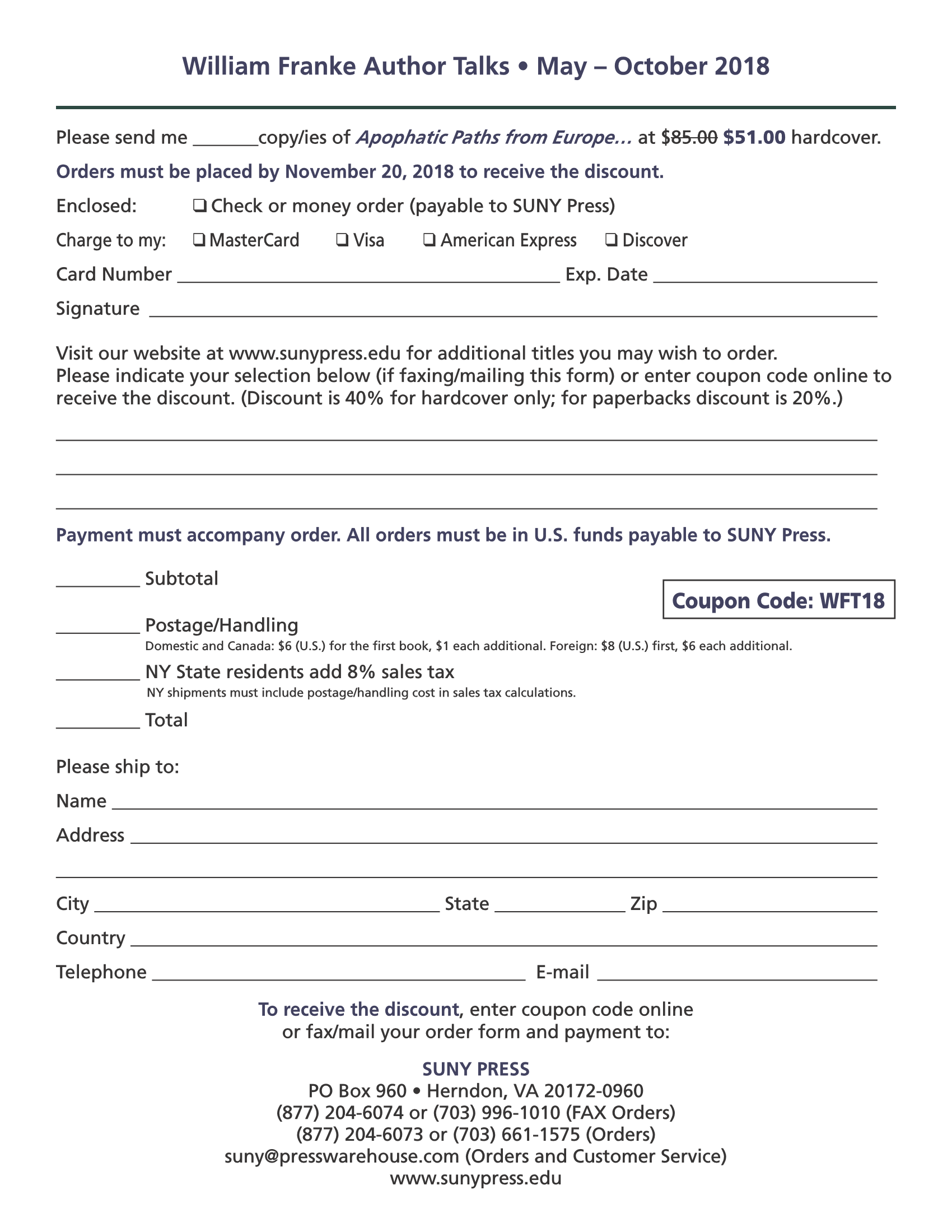