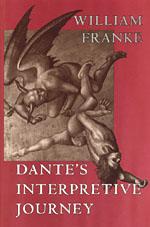 Danteâs Interpretive Journey proposes a theory of the existential, theological structures of interpretation by which our lives in language are constructed.Â  It brings the theological hermeneutics of Danteâs poem into contact with modern philosophical hermeneutics as developed particularly by Heidegger and Gadamer.Â  It explores a variety of theories of interpretation, medieval and modern, in an attempt to open original insights into the nature of interpretation, notably its existential ground and openness to transcendence in directions traditionally conceptualized in terms of religious revelation.

Critically engaging the thought of Heidegger, Gadamer, and others, William Franke contributes both to the criticism of DanteâsÂ Divine Comedy and to the theory of interpretation.

Reading the poem through the lens of hermeneutical theory, Franke focuses particularly on Danteâs address to the reader as the site of a disclosure of truth. The event of the poem for its reader becomes potentially an experience of truth both human and divine. While contemporary criticism has concentrated on the historical character of Danteâs poem, often insisting on it as undermining the poemâs claims to transcendence, Franke argues that precisely the poemâs historicity forms the ground for its mediation of a religious revelation. Danteâs dramatization, on an epic scale, of the act of interpretation itself participates in the self-manifestation of the Word in poetic form.

Danteâs Interpretive Journey is an indispensable addition to the field of Dante studies and offers rich insights for philosophy and theology as well.

Introduction: Truth and interpretation in the Divine Comedy
1: Historicity of Truth
2: Truth through Interpretation and the Hermeneutic of Faith
3: Interpretive Ontology: Dante and Heidegger

Ch. 1: The Address to the Reader
1: The Ontological Import of the Address to the Reader
2: Readerâs Address as Scene of the Production of Sense
3: Truth, Sendings, Being-Addressed: Deconstruction versus Hermeneutics or Dialogue with Derrida?
4: A Philological Debate: Auerbach and Spitzer
5: Petrarch, Boccaccio, and the Fiction of Philology

Ch. 3: The Temporality of Conversion
1: Interpretation as Ontological Repetition and Danteâs Fatedness
2: Ecstatic and Repetitive Temporality
3: Phenomenology of Fear/Anxiety in Inferno I
4: Dantesque Allegory and the Act of Understanding

Ch. 4: The Making of History
1: Relocating Truth: From Historical Sense to Readerâs Historicity
2: Reality and Realism in Purgatorio X
3: Some History (and a Reopening) of the Question of the Truth of the Commedia

â. . . these may very well be some of the most important pages written on Dante in the last decade, if not the last half century.Â  As Franke undertakes his rigorous theoretical definition and exploration of the terms that will continue to preoccupy him throughout his book, the reader is privileged to follow, from sentence to sentence, the workings of an outstanding philosophical intellect applying itself, at the highest level, to a text that eminently deserves but rarely receives such treatment. The case for Danteâs simultaneous historicity and contemporaneity, for what Franke calls âthe synergism between interpretation theory and Danteâs interpretive practiceâ (p. 4), is made here with a force and a precision that raise it to the level of genuine eloquence. . . . The introductionâlike the rest of the bookâshould be read and pondered by anyone who cares about Dante, or poetry, or history, or theology, or interpretation, or truth, or, quite simply (and in the philosophical dialect dear to Franke), our human being-in-the-world.â

Christian Moevs, The Thomist: A Speculative Quarterly Review 72/4 (2008):684-688 (through comparison with Dante’s Hermeneutics of Salvation: Passages to Freedom in the “Divine Comedy.” By CHRISTINE O’CONNELL BAUR. Toronto: University of Toronto Press, 2007)

“A decade ago, in Dante’s Interpretive Journey (Chicago: University of Chicago Press, 1996), William Franke observed, “Professional Dante criticism sometimes has a tendency to avoid or bracket the unanswerable, ultimate, philosophical, and theological questions that are nevertheless cause for perennial wonderment on the part of the readers of the poem…. That the project of the Commedia is to reveal theological truth may be said to be fairly widely accepted even among specialists…. Nevertheless, we as critics are content on the whole to leave Dante’s theological affirmations opaque, treating them as natural enough for someone of Dante’s time and temperament, but not seriously allowing that they could have any claim upon us in reading his poem today” (181-83). Franke is pointing to a paradox of contemporary Dante reception: the Comedy has ever more readers, ever fewer of whom are equipped to make any sense of, much less accept, the profound medieval and Catholic understanding of man and the world, and the claims to prophetic truth or revelation, that form the very motivation and substance of the poem. If we ignore all that–philosophy, theology, God, Catholic belief and morality, afterlife, providential view of history, salvation and damnation, the call to conversion–aren’t we missing the whole point of the poem, its challenge to us? BOOK REVIEWS 685 Those who seek to engage the Comedy’s challenge, its moral-existential claim on the reader, can either try to make Dante’s philosophical-theological understanding live again and matter for the modern reader (including Catholics), or else they can attempt to translate that challenge into terms more familiar or palatable to our own time, in particular into the language of psychology or of movements in contemporary philosophy. In The Metaphysics of Dante’s Comedy (New York: Oxford University Press, 2005), I pursued the first path; in Dante’s Interpretive Journey, William Franke pursued the second. Franke read the Comedy through the lens of the existential-ontological hermeneutic philosophy of Heidegger and Gadamer, to see how the text and the philosophy could illuminate each other. A decade later, Christine Baur’s book takes up precisely the same project. The essential principles, and the outlines of much of the analysis, were already laid out by Franke, a fact that Baur, despite her frequent citations from Franke, perhaps does not sufficiently acknowledge. Franke’s book is philosophically more penetrating than Baur’s, and it analyzes the hermeneutic philosophical method in relation to the Comedy with greater objectivity and critical sophistication. But Baur develops the outline of Franke’s analysis in much greater (sometimes repetitive) detail, and extends it to passages and questions not treated by Franke. Her book is carefully structured, with an almost Scholastic articulation of argument, and her analysis is lucid, precise, exhaustive, and often strikingly perceptive.”

The Nature of Reality

The âDivine Comedyâ is a work that explores the very nature of reality. As professor William Franke observes in his brilliant book âDanteâs Interpretive Journey,â understanding reality is never easy; it is something that each person must struggle with. The âDivine Comedyâ is not some work of Catholic propaganda. Dante is constantly inviting the reader to interpret the meaning of what is going on for him or herself. And itâs not: Hereâs the truth; take it or leave it. On the contrary, the text questions itself and invites you, the reader, to do exactly the same. How stimulating might that be for a late secondary school student, never mind an adult?

A couple of examples might help clarify what I mean here. The primary problem of the whole poem is whether it is literally true, for Dante claims it is. What are we to make of this work: Is it just a work of artâof artificeâor did Dante really go to hell and beyond, as he claims? Is he a visionary or a prophet of God? How can we know how to decide these claims?

Or take another example that I am particularly fond of, and which Franke explores in his book: How is it that Dante, on the one hand, refers to and dismisses the ancient and pagan gods as lying and false, and on the other, invokes Calliope and Apollo as his muses to inspire him on his journey?

With these questions, we come down to exploring the fundamental question of what truth is, and how true this account of Danteâs journey is.

5.0 out of 5 starsÂ Brilliant and original insights into Dante

Reviewed in the United Kingdom on 10 October 2020

This is a remarkable book, both for the range of its learning, and for the depths of its insights into poetry, philosophy, theology and Dante in particular. At the outset one has to say that the language is dense, academic and full of hermeneutical ‘jargon’ of the trade, which means it is not an easy read. But, for those who persevere, the honey is in the rock. I finally couldn’t put the volume down and had to finish it! Usually you say something like that when you are reading a crime thriller, so it has to be said that I found Franke’s ideas pretty exciting.

Furthermore, the book has to be unfashionable since its contentions seem to me to run plumb counter to post-modernism and all its underlying scepticism, nihilism and general atheism. Without being dogmatic, or sounding like some poster-child for fundamentalist Christianity, Franke manages to reintroduce into the debate about Dante’s poetry the concept of truth. Indeed, the starting point for all who have ever considered Dante, is the question: is Dante’s journey true? Did he really experience what he claims he did, or is this mere artifice? As Franke points out, ‘…in general we have long ceased to consider the question of truth as relevant to the understanding and appreciation of poetry’, but as Franke points out, this is ‘the one fundamental question for all readers of Dante’s poem’.

Franke steers a fine line between denying that there is any ‘truth’ that might be adumbrated from the poem – in short, asserting that The Divine Comedy is just like any other fictional work (indeed, any other work comprising language, which is to say all written accounts!), and it means whatever you think it might mean, and hagiographically worshipping the text as some sort of ‘secular’ version of the Ten Commandments whose meanings are apparently apparent, or inviolable.

As Franke contends, ‘Like perhaps no other literary work, Dante’s poem imposes itself as somehow more than imaginative literature according to the usual conception, as in some way religious truth, divine revelation.’ This approach leads to many profound insights. One of my favourite ones is his exploration of how ‘…the necessary and the contingent in salvation is somehow intimately related to poetry.’ This is incredible observation – and certainly not an orthodox one – but which begins to unpack some of the seeming contradictions within the poem. For example, how it is that Dante early on dismisses the false and lying gods (paganism) which sadly prevented Virgil access to Christian salvation, and yet invokes the Muses, and Apollo specifically, in the ascent through Paradise. How can that be consistent? Has Dante made a mistake? Franke’s account of this is masterful.

This, then, is a book I strongly recommend to anyone serious about understanding Dante’s The Divine Comedy. I love it, and will return to it many times as I brood on this masterpiece of Western civilisation.

Cited and/or discussed in:

Jennifer Margaret Frazer,Â Rite of Passage in the Narratives of Dante and Joyce (Gainesville: University Press of Florida, 2002)

Rewriting Virgil in the Commedia

Else Jongeneel, âArt and Divine Order in the Divina Commedia,â Literature and Theology (2007)