Dante and the Sense of Transgression: ‘The Trespass of the Sign’ 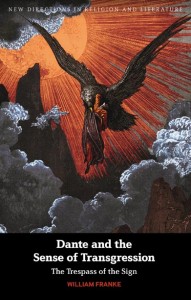 Order Form.pdf
Dante and the sense of Transgression Order Form 2013.pdf
Hardcover edition:Â Continuum:Â  New Directions in Religion and Literature Series
ISBN: 9781441160423Â  (paperback)Â Â Â  9781441136916 (hardcover) 200 pages
InÂ Dante and the Sense of Transgression, William Franke combines literary-critical analysis with philosophical and theological reflection to cast new light on Danteâs poetic vision. Â Conversely, Danteâs medieval masterpiece becomes our guide to rethinking some of the most pressing issues of contemporary theory.
Beyond suggestive archetypes like Adam and Ulysses that hint at an obsession with transgression beneath Danteâs overt suppression of it, there is another and a prior sense in which transgression emerges as Danteâs essential and ultimate gesture.Â  His work as a poet culminates in theÂ Paradiso in a transcendence of language towards a purely ineffable, mystical experience beyond verbal expression.Â  Yet Dante conveys this experience, nevertheless, in and through language and specifically through theÂ transgression of language, violating its normally representational and referential functions. Â Paradisoâs dramatic sky-scapes and unparalleled textual performances stage a deconstruction of the sign that is analyzed philosophically in the light of Blanchot, Levinas, Derrida, Barthes, and Bataille, as transgressing and transfiguring the very sense of sense.

****
âWritten in elegant and astonishingly readable prose, William Frankeâs volume gives a lucid portrait of a fundamental question that lies at the heart of DanteâsÂ Divine Comedy and has resurfaced in contemporary French philosophical reflection: poetic theology as a radical, transgressive mode of knowledge.Â  In mapping the ground of this fascinating debate, William Franke places Dante at the boundaries of thought and recovers the timeliness of his spiritual vision.Â  This book is a must-read for historians of religion, Dante scholars, literary critics, and adepts of cultural studies.âÂ  â Giuseppe Mazzotta, Yale University, USA

âCan language meaningfully point us to the divine? Is it possible for us to transcend our humanity to touch the mystery which surrounds it? How might the idolatrous projections of our ego be transgressed? These are just some of the questions provoked by William Franke’s scintillating book. By bringing Dante’s Paradiso and French Theory into mutually illuminating dialogue, Franke invites his readers to explore the outer limits of sense and meaning, and to consider seriously the theological implications of the unknowing at the heart of literary expression. His reflections will spark the interest not only of Dante scholars, theologians and literary theorists, but of anyone interested in probing the connections between literature and theology.âÂ âÂ  Vittorio Montemaggi, University of Notre Dame, USA