On What Cannot Be Said: Apophatic Discourses in Philosophy, Religion, Literature, and the Arts 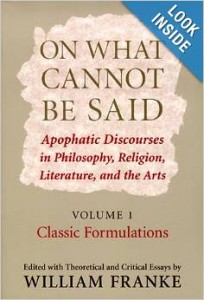 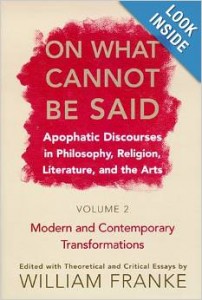 Amazon link
These volumes propose to bring into comparison with one another some of the most enduringly significant attempts, in different disciplines within Western culture, to define the limits of language, and perhaps to exceed them.Â The tradition of negative theology is compared with poetry of the ineffable and philosophical reflections on language that tend to define areas of inviolable silence.Â As pervasive a problem as the language of the unsayable in Western tradition can best be treated at the intersection between disciplines, signally philosophy, theology, and poetry.Â It is, moreover, not the property of any one national tradition, nor is it peculiar to any historical period, and it demands the wide-ranging comparative treatment that this volume proposes.Â Bringing together different disciplinary and cultural backgrounds is part of a design to catalyze open dialogue on âwhat cannot be saidâ lurking as an ineluctable provocation perhaps in all discourses.Â An anthology of classical and contemporary readings that have been milestones in the apophatic tradition is a resource that is most necessary to serve this dialogue that is already well underway and gaining in intensity. The excerpted are itnroduced by detailed critical-theoretical essays, and the volumes are furnished each with general introductions and prefaces outlining a history of apophasis, ancient and modern, and a theory of apophasis as a genre and a mode of discourse.

From Reviews of On What Cannot Be Said

âThese two volumes successfully realize a massive project: to propose and delineate a new field of discourse that provides a fresh approach to Western thought as a whole. In short, William Franke demonstrates the centrality of apophaticism, âwhat cannot be said,â to the Western tradition, from Plato (and before) to Derrida (and beyond). . . . Frankeâs work is nothing short of brilliant. . . . Franke shows incredible breadth of knowledge, critical acumen, and creative prowess throughout . . . . . [The] two volumes [are] essential reading for philosophers, theologians, literary scholars, intellectual historians, critical theoristsâin short, anyone interested in an illuminating and vital perspective on just about any facet of Western arts and letters.â

â. . . One of the most important and original contributions to the discussion of apophasis in recent years. . . . Frankeâs historical and disciplinary range, in light of his well-written and compelling essays, provides an illuminating insight into the pervasiveness of apophatic discourse. . . . Few others, maybe no others, provide the same clarity, coherence, and scope; few, maybe none, provide the same provocation to think further and more deeply, to think otherwise the tradition from which we come.â

“As an introduction to the phenomenon of apophatic discourse, Frankeâs anthology is a great success. It often displays astounding breadth of knowledge and scholarship on the part of its editor. . . . This volume offers the only introductory anthology of negative theology that I know of, and it is superb.”

âThe genius of Frankeâs two-volume critical anthology on apophatic discourses is the workâs breadth and depth of engagement with the concept in variously distinct and even conflicting contexts.â

âThe last and perhaps most commendable attribute of this volume for students in need of a reader like it is the remarkable quality of Frankeâs critical introductions for each text. These introductions demonstrate a depth and range of insight available only through careful and thorough research. It may be enough to merely collect these various sources in one place, but Franke has gone much further than that with the critical preparations he provides the reader for each new text. Each work sampled in the anthology receives a combination of the following: explanation of the historical context for the text, biographical details about the author, brief examination of the critical issues related to interpreting the text, discussion of the history of reception for the text, and thematic connections for the unit and the anthology to the particular text under consideration. In many cases, Franke provides his own translation of the works that he adds to his collection, and his attention to detail in this translation effort is evident on nearly every page. These characteristics alone inspire great confidence in the editorâs careful consideration of and familiarity with the long, strange story of apophatic literature in Western culture. The additional benefit of introducing each work so carefully provides scholars both a convenient and reliable guide for apophatic texts previously unknown and also makes this collection an excellent resource to use with students in undergraduate and graduate courses. On What Cannot Be Said will be a leading resource for anyone studying apophasis and negative theology for many years to come.

(The two superbly edited and commented volumes of theÂ recently published reader of William FrankeÂ represent anÂ important step on the way to a history of Negative Theology.Â On What Cannot be Said. Appophatic Discourses in Philosophy, Religion, Literature and the Arts. Vol. I: Classic Formulations; Modern and Contemporary Transformations, Notre Dame 2007.Â  The introductionsÂ alone can be read as a compressed history of Negative Theology.)

(The ambitious and achieved aim of the anthology is to demonstrate the richness of the expressions of apophatic discourse as registered in the entire arc of Western philosophy from Plato to J.-L. Marion; it does this, moreover, without neglecting the importance of apophatic discourse also in the fields of theology and literature.)

“For a comprehensive survey of the apophatic tradition from Plato to Derrida in all its aspects see the introduction and critical essays in William Franke’s impressive two-volume anthology,On What Cannot Be Said: Apophatic Discourses in Philosophy, Religion, Literature, and the Arts.”

What Holds Us Together

Over the years I have collected so many books that, in aggregate, they can fairly be called a library. I donât know what percentage of them I have read. Increasingly I wonder how many of them I ever will read. This has done nothing to dampen my pleasure in acquiring more books. But it has caused me to ponder the meaning they have for me, and the fact that to me they epitomize one great aspect of the goodness of life. Recently I bought a book titledÂ On What Cannot Be Said: Apophatic Discourses in Philosophy, Religion, Literature, and the Arts, Volume One: Classic Formulations. The title itself is worth far more than the price of the book, and then there is the table of contents. So far I have read only the last and latest selection, fromÂ The Wandering Cherub by Silesius Angelus, who wrote in the seventeenth century.

In the stack of magazines, read and unread, that I can never bring myself to throw away, there are any number of articles suggesting that science, too, explores the apophaticâreality that eludes wordsâdark matter, dark energy, the unexpressed dimensions proposed by string theory, the imponderable strangeness described by quantum theory. These magazine essays might be titled âLearned Ignorance,â or âThe Cloud of Unknowing,â or they might at least stand beside Platoâs and Plotinusâs demonstrations of the failures of language, which are, paradoxically, demonstrations of the extraordinary power of language to evoke a reality beyond its grasp, to evoke a sense of what cannot be said.

I love all this for a number of reasons, one of them being that, as a writer, I continually attempt to make inroads on the vast terrain of what cannot be saidâor said by me, at least. I seem to know by intuition a great deal that I cannot find words for, and to enlarge the field of my intuition every time I fail again to find these words. That is to say, the unnamed is overwhelmingly present and real for me. And this is truer because the moment it stops being a standard for what I do say is the moment my language goes slack and my imagination disengages itself. I would almost say it is the moment in which my language becomes false. The frontiers of the unsayable, and the avenues of approach to those frontiers, have been opened for me by every book I have ever read that was in any degree ambitious, earnest, or imaginative; by every good teacher I have had; by music and painting; by conversation that was in any way interesting, even conversation overheard as it passed between strangers.

‘. . . this two-volume anthology powerfully develops a linguistic theory alongside the very texts that one needs to measure the theoretical claims themselves. Franke’s work genuinely, even if ironically,Â both serves as a catalyst to initiate dialogue about âwhat cannot be saidâ or about âthe âapophatic differenceâ of the sayable from the unsayable,âand, perhaps most importantly for such ironic dialogue, increases possibilities for toleration of differences that remain âopen infinitely.â’

Jack L. Sammons review:
This is a terrific collection of what might be considered the essential documents of apophatic discourse. This volume contains modern and contemporary versions of writings about that which cannot be said. The introduction is excellent, although really it is more of an article on its own than an introduction, and each document is also very thoughtfully introduced, primarily by putting it in the overall context of the author’s work and giving a thought or two to how it relates to a central theme of negative theology. In fact, rather than entitling this “apophatic discourses, it might have been better to say that these are (mostly) secular discourses about negative theology for this, it seems to me, is the author’s true interest. In any case, the book is extremely useful for anyone thinking about that which cannot be said. There are surely quibbles — well, more than quibbles — along the way with the author’s take on the various pieces, and some of the choices are, well, clearly idiosyncratic and perhaps eve a little strange. This, however, is inevitable in a collection such as this that breaks new ground in creating a discipline. While already familiar with most of the pieces, I truly enjoyed the journey that this collection creates. It’s a lovely bit of work.

Boston University Institute for Philosophy and Religion blog
âRon Bernier writes:Â  âI found much to admire and think further on in Dr. Schweizerâs talk, âThe Poetry of Suffering and Waiting.â Â In particular I was struck by the consistency of the theme of the âsilenceâ and âindecipherabilityâ of sufferering â that the langauge of suffering, for both the afflicted in his/her solitude in pain and the âwaitingâ of he/she/we who attend on them is nameless or âunsayable.â Â This put me in mind of the theology and philosophy of apophasis â a form of discouse that fundamentally consists of langage that negates itself in order to evoke that which is beyond words, beyond the limits of saying altogether. Â ââApophasisâ reads etymologically,â explains William Franke (professor of comparative literature and religious studies at Vanderbilt University; see hisÂ On What Cannot Be Said, Notre Dame, 2007), âas âaway from speechâ or âsaying awayâ (apo, âfromâ or âaway fromâ;Â phasis, âassertion,â fromÂ phemi, âassertâ or âsayâ), and this points in the direction of unsaying and ultimately of silenceâ (Franke, vol 1, 2).Â  Apophasis is fostered by a notion fundamentally opposed to the central tenet of classical Greek philosophy of Being (or ontology) and its claims for autonomous human reason; it articulates, as it were, the utter inefficiency of the Logos to name ultimate reality. Â This prompts me to think more about the very possibility of the apophatic body â that is, beyond a matter of the inadequacy of linguistic communication, to what extent can we, as waiting attendant to the sufferer, enter into another type of communication with the apophatic material body.