Becoming a (Digital) Publisher and Encoding Haitian Opera with TEI

Posted by Nathan Dize on Monday, October 29, 2018 in Uncategorized.

TEI (Text Coding Initiative) encoding is a widely used platform by digital technologists, librarians, and academics to create digital editions of written works. The benefits of such an initiative are clear for many reasons. Creators of TEI-powered digital editions can establish open-access resources that circumvent costly print markets for critical editions (think the Norton and Oxford varieties), reducing the financial burden on readers. TEI editions can also include the extensive annotation and rigor of a critical version of a text, comparing, for instance, the many word variants in Emily Dickenson’s poetry or the numerous Folios and Quartos of Hamlet or King Lear. Not to mention that digital editions can bring life to texts long out of print or that have been estranged from public consumption.

One of the quirkier aspects of TEI editions, I have found, is that you become the Publisher of the text. When encoding anything in TEI, there are a series of protocols you must follow in order to start your document in earnest. These “elements” include “File Description,” “Title Statement,” “Publication Statement,” and “Source Description.” All of these elements are important for building a “well-formed” TEI edition that not only describes the nature of the text, but archives the creation of the present edition. Here is where the new edition is born. As I mentioned before, the weird thing about TEI digital editions is that you and anyone involved in the drafting of the document become the publishers. In the first elements of your new XML document, the title statement is where you declare your role as the editor and in the publication statement you declare yourself the publisher of the work in question.

This whole process feels quite bizarre to me as a scholar trained in postcolonial studies because becoming the publisher feels so appropriative. And it can be if you do not include information from the original source in your bibliographical description or if, in building your edition, you do not include historical annotations about the circumstances of original text’s publication.

I am currently encoding the Haitian opera L’Entrée du Roi, en sa capitale (The Kings Entrance to His Capital,” written by Juste Chanlatte, the Count of Rosiers in 1818, published by the Royal Printing Press of the Kingdom of Haiti. The idea of “becoming” the publisher of this text in digital format is discomforting because improper encoding practice could wane the visibility of the Royal Printing Press––not to mention undermine the processes of state-building by the Haitian monarch, King Henry Christophe.

Although the northern Kingdom of Haiti only existed for a short period of time, from 1811-1820, writers from the North were able to publish voluminously thanks to the Royal Press and distribute their works throughout the Atlantic World. For the author Chanlatte, who was a secretary to Christophe as well as a playwright, librarian, and newspaper editor, publication was one path to authority (check out La Gazette Royale D’Hayti for more on the rich culture of early Haitian printing). The printers who oversaw the Royal Press in its early years, the men named “P.Roux” and “Buon,” thus become a part of the history of the work and a crucial character in the spreading of Haitian cultural knowledge through printed materials. 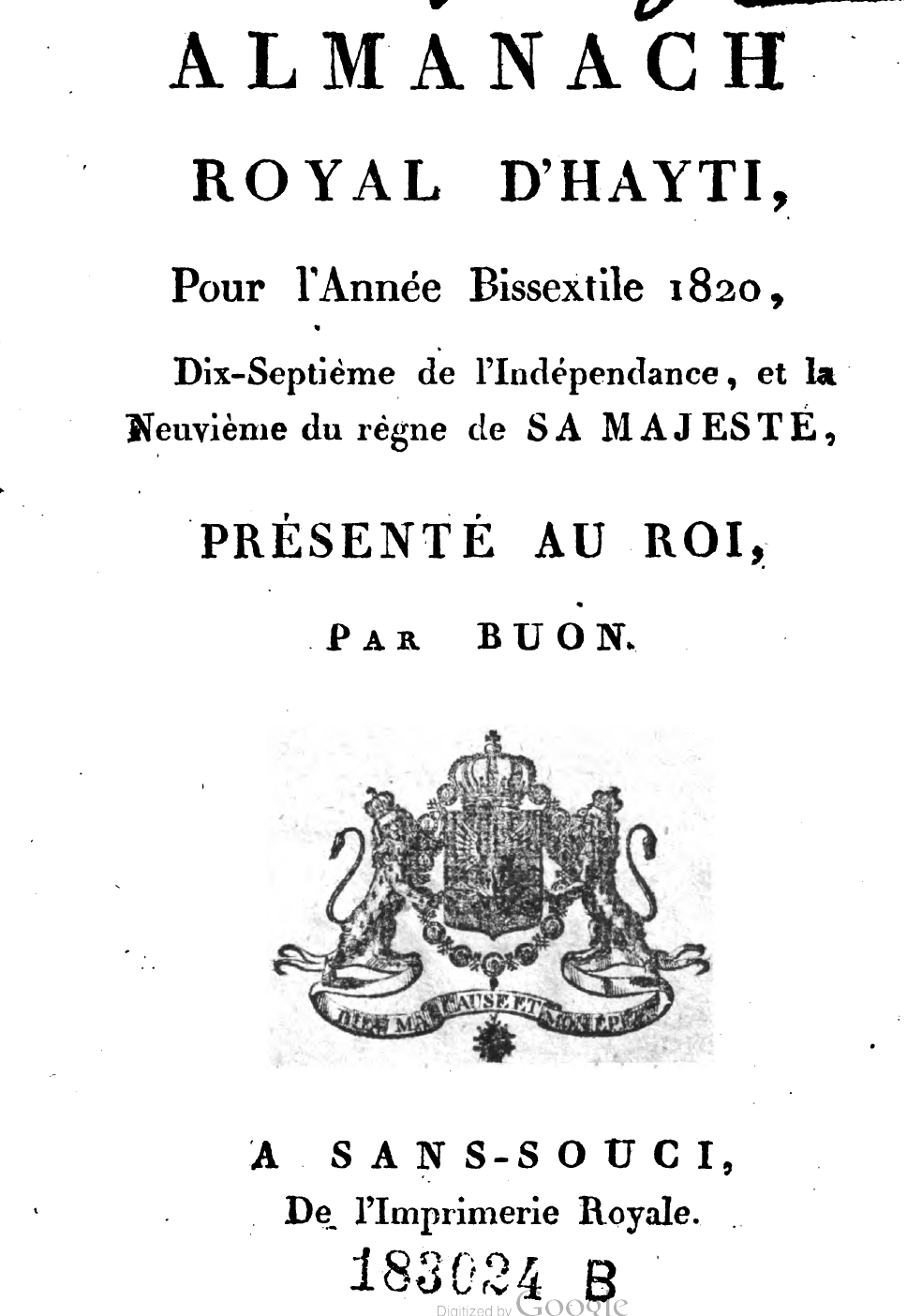 Apart from the authorial portion of the publication, TEI guidelines also insist on the designation of a place of publication such as a city, a state, the home institution of the author, or “born digital” to mean that it was published online for the present edition. Again, this gave me reason for pause because to shift the “pubPlace” from Sans-Souci in the area of Milot, Haiti to a US institution has theoretical consequences. Such concerns are also part of the archival history of this particular opera, which has been archived and digitized by the Houghton Library at Harvard University. The inside cover of Harvard’s copy features a label stating that the book was a gift of Colonel Israel Thorndike, the book’s previous owner. From Henri Christophe’s palace, to Colonel Thorndike, to Harvard University, to my computer, Chanlatte’s opera has gone through many hands already.

These are some of the notes that I will be taking and inserting into the edition of L’Entrée that I have started––an awareness of the power of authorship, printing history, and archival power will hopefully lead to a more equitable final product. And as I build the edition I will check back in with more thoughts on encoding Chanlatte’s opera and how postcolonial Digital Humanities practice can mitigate some of the inherent concerns with archiving and digitization.