Zoned zircons record the time-temperature-composition history of the magma in which they grew. Recent development of trace element analysis techniques using SHRIMP-RG (Mazdab and Wooden, 2006), combined with in situ U-Pb and U-series geochronology and the new Ti-in-zircon thermometer (Watson et al., 2006), provides a powerful tool for extracting this information. We have used this approach to delineate the complex history of the Spirit Mountain batholith in southern Nevada, including repeated episodes of crystallization, melt evolution, differentiation, recharge, and transport of magma between storage zones in the shallow, Miocene intrusive system (Claiborne, et al., 2006; Walker et al., 2007). Zircons from individual samples, and even single zircon grains, record temperature variations of up to 100Â°C and order-of-magnitude variations in trace element concentration. Unfortunately, the timescales of closely-spaced events recorded by zoning are beyond resolution of in situ (SHRIMP) U-Pb geochronology (>105 years for Miocene zircons). By applying these methods to zircons erupted from very young volcanic systems, including U-series geochronology with its much higher age resolution (~104 years), we anticipate better constraining the timescales of pre-eruptive magmatic processes such as rejuvenation and differentiation, and providing insight concerning the connections between volcanic and plutonic systems.

We are now also examining glasses and feldspars from throughout the history of the volcano to better understand the dynamics of magma storage and evolution in the Mount St. Helens magmatic system.

Zircon as a Record of Magmatic Processes 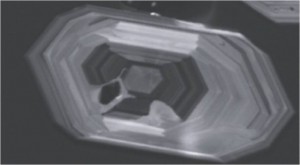 The accessory mineral zircon is commonly used to investigate magmatic systems.Â  I am interested in using this powerful tool, but also in better understanding its crystallization and subsequent behavior so that we can better interpret its records.Â  This includes, especially, how we use its trace element geochemistry to understand the compositions and temperatures of the melts from which it grew.

Our REU program has recently ended.Â  We thank you for your interest, and hope you’ll keep an eye out for papers coming out soon! Supereruptions are explosive events that eject more than 1000 cubic kilometers of volcanic material â capture our imagination and compel us to consider the potential effects of one of Earthâs rarest yet deadliest acts.Â  Comprehending what led to supereruptions in the past is essential to understanding and predicting similar events in places where geologically recent supereruptive activity suggests a threat, including the U.S. (e.g. Yellowstone), South America (southern Andes), Indonesia, and New Zealand. 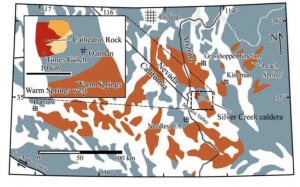 Moreover, the Silver Creek caldera and its immediate environs also offers a stellarÂ record of the PSTâs immediate magmatic precursors and successors, meaning that we can evaluate the long-term evolution of this volcanic center in order to gain a better understanding ofÂ how andÂ why supereruptions are generated â topics that scientists are actively investigating, and to which the geologic record in the southern Black Mountains may provide valuable clues.

We aim to answer the following supereruption-related questions: