Posted by Jenna Phillips on Monday, December 16, 2019 in Excerpts. 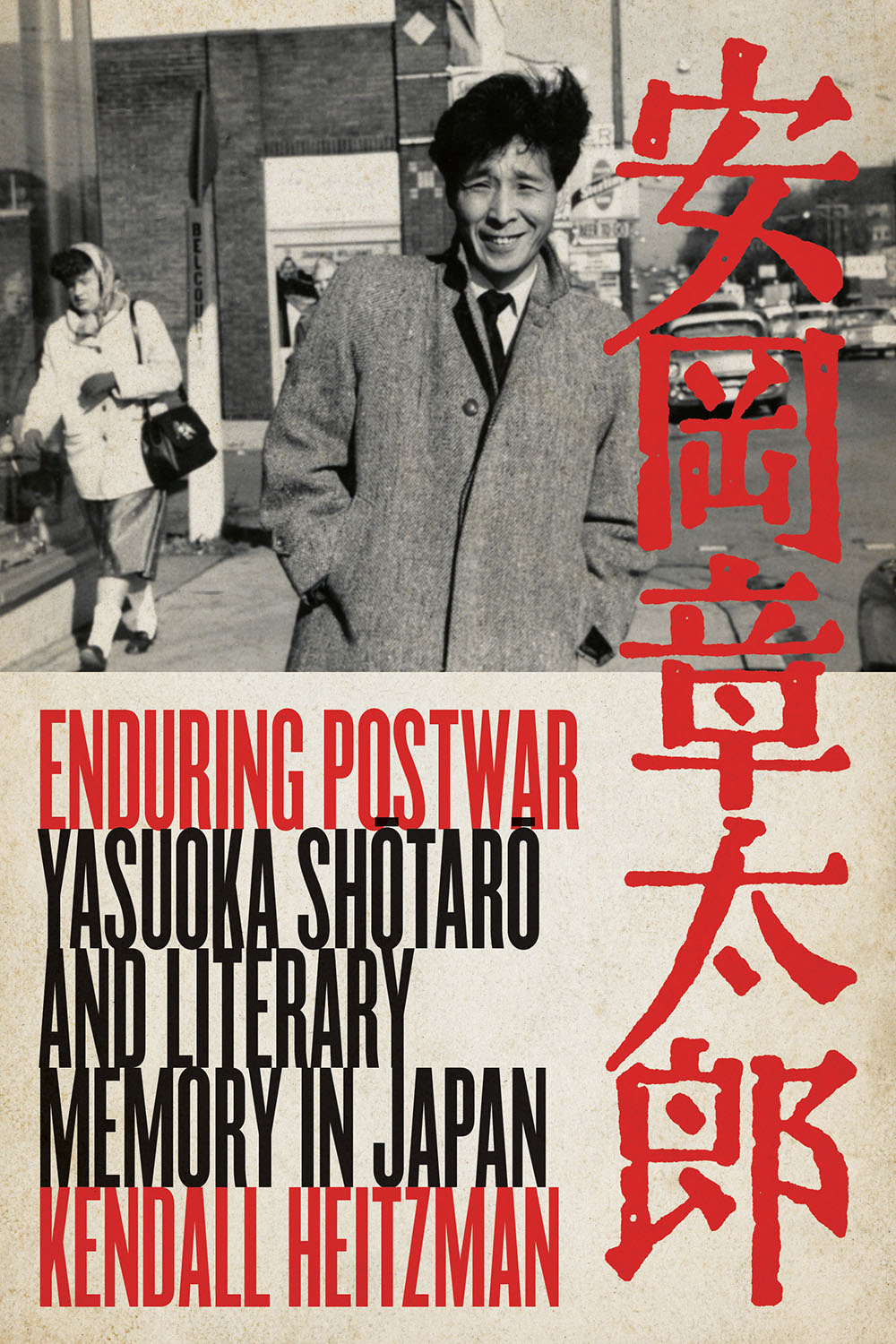 This week brings the official publication date of Enduring Postwar: Yasuoka Shōtarō and Literary Memory in Japan by Kendall Heitzman.

Writer Yasuoka Shōtarō (1920–2013) was perfectly situated to become Japan’s premier chronicler of the Shōwa period, the span of Japanese history corresponding to the reign of Emperor Shōwa (Hirohito) from 1926 to 1989. Over fifty years, Yasuoka produced stories, novels, plays, and essays, as well as monumental histories that connected his own life to those of his ancestors. He was also the only major Japanese writer to live in the American South during the Civil Rights Movement, when he spent most of an academic year at Vanderbilt. In 1977, he translated Alex Haley’s Roots into Japanese.

For a long period, Yasuoka was at the center of the Japanese literary establishment, serving on prize committees and winning the major literary prizes of the era: the Akutagawa, the Noma, the Yomiuri, and the Kawabata. But what makes Yasuoka fascinating as a writer is the way that he consciously, deliberately resisted accepted narratives of modern Japanese history through his approach to personal and collective memory.

In Enduring Postwar, the first literary and biographical study of Yasuoka in English, Kendall Heitzman explores the element of memory in Yasuoka’s work in the context of his life and evolving understanding of postwar Japan.

Read on for an excerpt from Heitzman’s Introduction:

Debating whether or not the postwar is over in Japan is one of the great parlor games of modern Japan studies (see Gluck, “The ‘End’ of the Postwar,” for multiple conceptions of “postwar Japan”). The question returns to Yasuoka’s narrative again and again. The most famous declaration of the end of the postwar came in July 1956, when the government issued an economic white paper declaring, in a famous turn of phrase, “it is no longer the postwar” (mohaya sengo de wa nai). In My Shōwa History, Yasuoka proclaims the end of the postwar as though it is an incantation, the expression of something longed for rather than a fait accompli. At various points, he wonders whether the postwar has ended or fundamentally changed, including when Truman replaced MacArthur as Supreme Commander of the Allied Occupation in 1951 (Boku no Shōwa-shi [BSS] (My Shōwa History) 2: 122–23), when Kurosawa Akira’s Rashōmon won the Golden Lion at the Venice Film Festival in 1951 (BSS 2: 126), when a good friend committed suicide in 1956 (BSS 2: 181), when he and his friends hear in the late 1950s that in the United States people say “postwar” to mean post Korean War (BSS 2: 187), when he institutionalized his mother (BSS 2: 188), when the coverage of the 1960 US–Japan Security Treaty protests (commonly known in Japanese as Anpo, an abbreviation of the term for the treaty itself, the Anpo jōyaku, itself an abbreviation of the full treaty title) gave way to news about the 1960 Rome Olympics (BSS 2: 247), when the economy boomed in the mid-1960s (BSS 3: 130), when a number of literary giants passed away in 1965 (BSS 3: 141), and when the worldwide unrest of 1968 appeared to usher in a “new postwar” (BSS 3: 166–67). One realizes along the way that the postwar never truly ends.

If the postwar is located between the personal and the public, it is also somewhere between the national and the international. In 1960 Yasuoka prepares to head for Nashville, Tennessee, on a grant from the Rockefeller Foundation and notes that William Faulkner had once said that he understood Japan’s pain, because his people, too, had suffered defeat at the hands of the Yankees. Yasuoka is stunned that there is a place that has been struggling with a postwar mentality for nearly a century:

To be sure, it was no longer the postwar. But all that meant was that the shock of losing the war had at last dissipated. What sort of thing was it to lose a war? I still wasn’t able to grasp the meaning of it, nor was I able to clearly parse the bitterness of it. (BSS 2: 254–55)

This casual remark by Faulkner that the two regions share a specific bond will become the driving force for Yasuoka’s memoir of his time in Nashville, A Sentimental Journey to America (Amerika kanjō ryokō, 1962), but here the South merely issues a reminder that the postwar, like Paris, is a moveable feast. It follows Yasuoka through time and space and offers as proof of its ongoing existence the numbing repetitiveness with which it is declared to be over. Is it possible that this is trauma? Andreas Huyssen describes trauma as “located on the threshold between remembering and forgetting, seeing and not seeing, transparency and occlusion, experience and its absence in repetition” and suggests that “both memory and trauma are predicated on the absence of that which is negotiated in memory or in the traumatic symptom. Both are marked by instability, transitoriness, and structures of repetition” (8). Yasuoka’s history of Shōwa, “marked by instability, transitoriness, and structures of repetition,” bears all the hallmarks of a traumatic text. But is it?

To be sure, there are wounds that have not healed. The narrative is riddled with suicides that are, in one way or another, blamed on the enduring postwar: Dazai Osamu’s, literary critic Hattori Tatsu’s, and Mishima Yukio’s among them. Yasuoka himself considers suicide at least twice in the narrative. At one point, he asks a veterinary student visiting his father to bring him some poison, ostensibly to take care of a screeching cat in the neighborhood. When the student obliges Yasuoka on his next visit, Yasuoka realizes what he is actually plotting in his heart and, chilled, refuses to accept it (BSS 2: 95–97). And yet, all memory is not trauma, Huyssen himself concludes, for that would treat it “too exclusively in terms of pain, suffering, and loss. It would deny human agency and lock us into compulsive repetition. Memory, whether individual or generational, political or public, is always more than only the prison house of the past” (8). For Yasuoka, as we have seen, the past informs the present, creates bonds between people of different races and nationalities, and serves as a wedge against despair and the isolation he has felt throughout much of his life. If anything, the difficulty for Yasuoka is in retaining his individual voice in the face of the collective understandings of history.