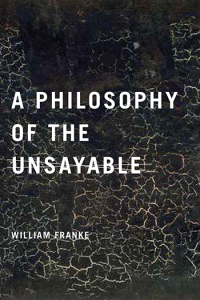 This monograph proposes an original philosophy pivoting on analysis of the limits of language and explains why the encounter wit what exceeds speech has become the crucial philosophical issue of our time.Â  It also offers readings of literary texts, especially the poeticÂ oeuvres of Paul Celan and Edmond JabÃ¨s, in which the philosophical principlesÂ  worked out on a theoretical plane are illustrated and put into practice.Â  Finally, it engages with philosophical theologies and philosophies of religion in the debate over negative theology, demonstrating the irresistible infiltration of negative theology into the thinking even of those who attempt to deny or delimit it.Â  Both extremes of Radical Orthodoxy and Secular Theology share in common not very fully acknowledged and sometimes explicitly repudiated premises in negative or apophatic theology, which surprisingly emerges as key to fostering genuine possibilities for dialogue among even the most antagonistic approaches to philosophical theology on the scene today.

From University of Notre Dame Press
âWilliam Franke is an articulate spokesman for what cannot be said not only with regards to modern European poetry but also with respect to contemporary theology.Â A Philosophy of the Unsayable is essential reading for everyone working in religion and literature and in modern theology.â âÂ Kevin Hart, Edwin B. Kyle Professor of Christian Studies, University of Virginia

âBy now, it would seem that there could be no more to say about not-saying. Apophatic language and negative theology have been accused of meaninglessness, nihilism, and even ill-concealed ontologies. In this lovely and surprising book, William Franke not only deftly undoes these criticisms but shows that apophasis underlies and strangely grounds all language and thought, even of those very discourses that most vigorously reject it.Â A Philosophy of the Unsayable demonstrates with elegance that there is indeed more to say, and more that is both meaningful and important.â âÂ Karmen MacKendrick, Professor of Philosophy (Joseph C. Georg Endowed Professorship of Philosophy, 2009-12), Le Moyne College

âWilliam Franke is an eminent scholar in comparative literature, who is schooled in philosophy and religion. He is recognized as one of the most creative contemporary thinkers working at the double intersection of philosophy and literature and philosophy and theology.Â A Philosophy of the Unsayable shows an intellectual grasp of a dizzying array of discourses and sheds real light on all thinkers who are discussed.â âÂ Cyril OâRegan, Huisking Professor of Theology, University of Notre Dame

“William Franke is a major voice in current discussions of âReligion and Literature.â One thing that makes him unusual, as well as highly valuable, is that unlike most people in the area he has a broad knowledge of philosophy, both ancient and modern; another unusual characteristic of this author is that his writing is firmly based in meticulous scholarship in several European languages. I have long been an admirer of his work, and I am pleased to say that the substantial typescript I have been given to read,Â A Philosophy of the Unsayable, has all the desirable qualities I have just indicated. There is one further quality that makes Professor Franke an author that Notre Dame University Press will want to retain: he writes a remarkably clear and engaging prose.”â(Senior scholar writing anonymously for UNDP)