The Revelation of Imagination: From the Bible and Homer through Virgil and Augustine to Dante

The Revelation of Imagination:Â Â  From Homer and the Bible through Virgil and Augustine to Dante

Link to Project Muse: The Revelation of Imagination

REVIEWS:
Wayne Cristaudo, “The Wisdom of the Western Canon,” Review of Revelation of Imagination

Rebecca Dark, Review of Revelation of Imagination in Christianity and Literature 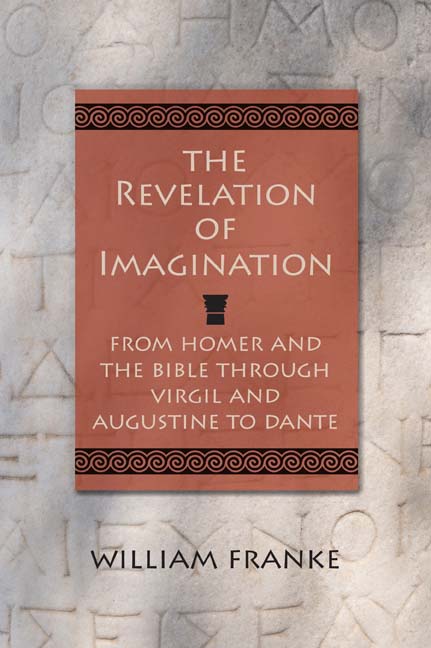 “. . . a quite dazzling defense of poetry as central to human knowledge, by way of phenomenological considerations of the act of knowing. . . . At a moment in which the religious tradition and the secularization of culture seem to have nothing to say to each other–a catastrophic loss for both sides–Frankeâs development of the high theme of prophecy in all its meanings — and the role of the prophetic in secularization, and of the secular in prophecy! — in the most classic Western works is sorely needed–I am tempted to say, is itself prophetic.” Â Â  — Bainard Cowan, Professor of English, Cowan Chair in Literature, University of Dallas

“The bottom line is this: âThe Revelation of Imaginationâ is a brilliant study of formative works that should never lose our attention.Â  Indeed, the manuscript is itself ‘revelatory.â’ Â  –Peter Hawkins, Professor of Religion and Literature, Yale Divinity School

“. . . the reader of Frankeâs book comes away with a sense of the differences and connections among these works, but also a sense of the âwholenessâ of the tradition so eloquently discussed in Frankeâs conclusion. . . . It is a learned work, and belongs on a shelf that includes Auerbachâs Mimesis.”Â  — Paul Contino, Blanche E. Seaver Professor of Humanities, Pepperdine University

Wayne Cristaudo, “The Wisdom of the Western Canon,” Review of The Revelation of Imagination:

“This is one of those rare and wonderful books that reflects a lifetime of learning and thinking. It is at once a powerful mediation upon five literary bulwarks of the Western tradition and a philosophical argument about the meaning of world-shaping literature. And, while the last fifty or so years have seen the institutional and disciplinary defeat of the idea of a Western canon and the kind of literary analysis of classic works that this book so glisteningly exemplifies, The Revelation of Imagination amply demonstrates why Homer, the writers of the Bible, Virgil, Augustine, and Dante have been invaluable and inexhaustible conduits for the revelations of the human imagination. There is not a page where William Frankeâs ability to enter into the crafting and language of the work he is discussing does not
profoundly enrich oneâs appreciation of the text. That he is able to take works and writers of whom so much has been written and yet make the reader feel how much more there is still to say and see, how inexhaustibly open these works are, is testimony to the mastery of his craft. His attention to stylistic detail, his ability to savour the intricate interweaving and balance of textual elements and to identify the semiotic ricochets and resonances of a text, to call upon the most brilliant and apposite insights of philosophers, theologians, and literary critics, to show the sheer power and grandeur of inventiveness and attentiveness to the human and divine conditions that elevate the works of these authors to a plane where they shaped their times and subsequently the human possibilities that followed in their wake, are all combined with a style that is at once devotional and enthusiastic, panoramic
and nuanced, authoritative and humble.”

Rebecca Dark, Review of Revelation of Imagination in Christianity and Literature:

Ever-increasing pressure on colleges and universities to demonstrate the marketability of their graduates in the business world is a source of anxiety for many of us in the humanities. We all know the importance of what we teach, even that the
skills and knowledge we inculcate in our students are marketable, but we do not
always find it easy to communicate the immediate value of the humanities to our
culture. William Frankeâs project in The Revelation of Imagination: From Homer
and the Bible through Virgil and Augustine to Dante is to ââfocus on what is enduring
and perennial rather than accommodated to the agenda of the moment,ââ but in so
doing he also provides a powerful defense of the contemporary relevance of the
âârevelationsââ great literature can provide (xi). Rereading five classic texts that he
describes as aspiring ââto become the conscience and the consciousness of a whole
civilization,ââ Franke demonstrates their power to articulate new truth for the
immediate present of succeeding cultures.
Franke is an eminent scholar whose perhaps-best known works, including his
2007 anthology On What Cannot Be Said and his 2014 A Philosophy of the
Unsayable, explore apophatic discourse. The Revelation of Imagination is every
bit the strong scholarly work, replete with footnotes and references, one would
expect. The extreme clarity and accessibility of the text, however, open it to a much
wider audience than the scholarly academic community. Anyone interested in
learning about the great texts Franke treats in the book will find it a wonderful
reading guide. Each chapter could be read alone as an aid to understanding a
specific text, but taken as a whole they offer a finely woven argument regarding
the revelatory nature of great literature. While Frankeâs approach is post-secular in
that it is open to and encourages finding transcendent meaning in literature, this
work is literary rather than religious and would be useful even to those who do not
adhere to a faith tradition.