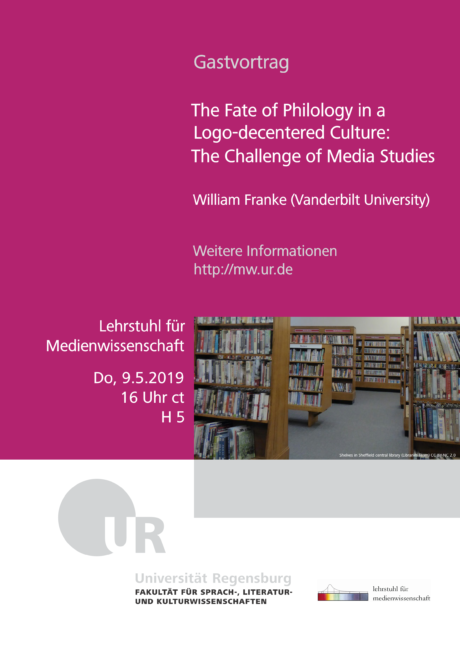 âThe Fate of Philology in a Logo-decentered Culture: The Challenge of Media Studiesâ
TheÂ  revolution of media studies admittedly poses challenges to philology and its traditional virtues. The displacement of the axis of study from literature, and the underminingÂ  of the authority of the written word, comes as a frontal challenge.Â  Media studies is a special and emblematic challenge particularly to philosophical philology because it is placed under the aegis of technology, and technology is the driving force that undermines humanistic culture as traditionally understood â as based on literatureÂ  and the word. Can philology in some way join forces with our ongoingÂ  technological revolution for the advancement of humanistic culture?
In this paper I suggest how a speculative philology can be seen as allied with media studies and even as a broader way of seeing the media studies revolution not asÂ  ending and replacing philology but as fulfilling it. Media studies can lead humanistic study in a speculative direction,Â  even pushing it to an absolute or zero degree of specularity, and thusÂ  help to reveal the true import of studying literature as it has beenÂ  pursued since antiquity, notably in the discipline of rhetoric.
Wir freuen uns auf euch und eure BeitrÃ¤ge/Teilnahme”