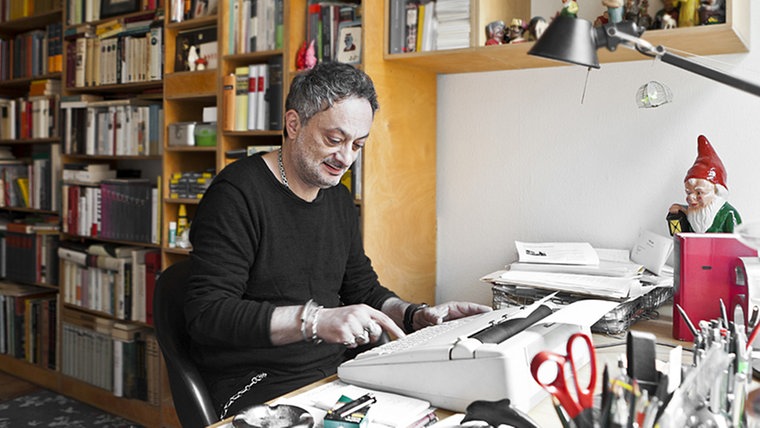 If there is a canon of marginalized literature, Feridun Zaimoğlu is one of its masters. Born in 1964 in Bolu, Turkey, his family migrated to Germany in 1965. After a few years in Berlin, the family settled in Munich, and Zaimoğlu would go on to study medicine and then art at Kiel University before ultimately focusing on writing and painting. His endeavor clearly paid off and he became a literary sensation in 1995 with the debut of his novel Kanak Sprak-24 Mißtone vom Rande der Gesellschaft. The novel presents dramatized versions of recorded conversations Zaimoğlu collected over the years from various Turkish milieus in Germany to capture life in Germany for young Turkish-Germans who identify as ‘Kanaken,’ and specifically their answer to the question: “Wie lebt es sich als Kanake?”

He has gone on to have a prolific career as both a visual artist and author, and early on his career he worked extensively on projects surrounding ‘Kanak’ culture, such as the script for the short film Deutschland im Winter – Kanakistan. Eine Rap-Reportagte (1997), or the novel Abschaum, published in the same year and eventually turned into the movie Kanak Attack in 2000. During this time he was also in a highly publicized debate with Heide Simonis, the Minister-President of Schleswig-Holstein, on the talkshow Drei nach Neun.

The debate, which can be seen below, focuses largely on Kanak Sprak as a concept and the lives of second and third generation Turkish immigrants in Germany and quickly turns aggressive. “Meinen Sie, Sie machen damit Freunde in Deutschland?” asks the moderator Gaby Hauptmann after a reading from Zaimoglu’s work Allemannenbeschimpfungen. The roundtable participants continually speak over Zaimoğlu, question why he can call himself a Kanake but they cannot, question his authenticity as a self-proclaimed Kanake, criticize the aggressive tone of his writing. Heide Simonis, in particular, adamantly claims that she refuses to believe an ‘actual’ Turkish citizen of Germany would speak in such a way, and she is further angered by the fact anyone would dare speak in such a way considering all that Germany does for its Turkish population. She is not receptive of Zaimoğlu rebuttal that her argument places the guilt on the young Turkish population in Germany for daily discrimination they face, and the debate only becomes more heated from there, though one central motif emerges: the tone in which the Turkish minority in Germany is allowed to express their frustration with German culture and bureaucracy, according to members of the dominant German culture.

The aggressive tone of the language and the arguments presented in Zaimoğlu’s works are the focal point of the debate, the discriminatory experiences behind which Zaimoğlu’s German audience seems to have trouble comprehending. Though this talkshow remains perhaps Zaimoglu’s most famous public debate on the topic, he became a common voice in the German Feuilleton, as well as television and radio. Despite distancing himself officially from the Kanak Attak movement in 2000, he remains an important figure in this controversial debate about who in the margins is allowed to speak, and when they do, the tone in which they are allowed to do so by the hegemonic culture.