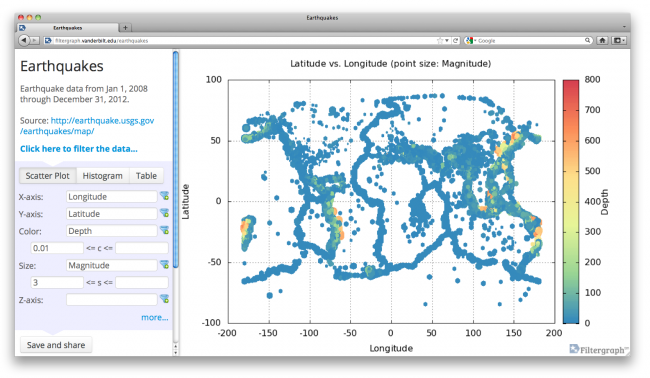 Filtergraph (http://filtergraph.com) is a web platform for visualizing a large variety of datasets. I led the initiative to develop Filtergraph in early 2011 as a dashboard to facilitate the discovery of exoplanets, which are planets orbiting stars outside of our solar system. At the time our group needed an interactive dashboard for KELT-South, a telescope in South Africa operated by our group to facilitate the discovery of exoplanets. I started working on it as my master’s thesis project; as many other groups have expressed interest in our project, I worked hard to add new features and open the site to user registration. With hundreds of people using Filtergraph around the world, I was brought in full-time by the Department of Physics and Astronomy after receiving my master’s degree from Vanderbilt in 2013.

In 2014, we received a grant from the National Science Foundation to explore commercial opportunities for our project beyond astronomy. As part of the grant, I interviewed over 100 data professionals in a variety of fields about the tools they use to manage data and how they use them. Our group used the feedback we received to launch a new version of our site a year later, and I played a key role in its development. We continue to work with the Vanderbilt Center for Technology Transfer and Commercialization and the Nashville Entrepreneur Center to commercialize our platform, and in 2017 we signed an agreement with the NASA Exoplanet Archive to enhance their pre-generated plots with interactive visualizations powered by Filtergraph.

Also in 2017, Filtergraph became a part of the Frist Center for Autism and Innovation. It turns out that many autistic people have the ability to understand patterns in images at a superior level, such as the images that may appear in a scatter plot of Filtergraph. If we can develop the tests to identify those people, we can set them up for long-term employment doing similar tasks. Also, by exhibiting Filtergraph at the FCAI office in Vanderbilt’s new Innovation Pavilion, we hope to inspire autistic children and young adults into similar career paths.

My duties today include maintaining the servers, adding new features and develop key partnerships with groups in and out of Vanderbilt. Among these groups is NASA’s Transiting Exoplanet Survey Satellite (TESS), a NASA satellite in operation since 2018. With nearly 20 million rows, a heatmap of the entire dataset can be produced in about 3 seconds. We have also received interest from data professionals in a wide variety of fields, including geology, journalism, and civic planning.

Filtergraph is free to use at filtergraph.com.