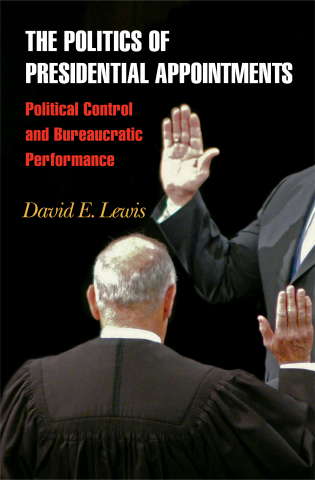 In the wake of Hurricane Katrina, many questioned whether the large number of political appointees in the Federal Emergency Management Agency contributed to the agency’s poor handling of the catastrophe, ultimately costing hundreds of lives and causing immeasurable pain and suffering. The Politics of Presidential Appointments examines in depth how and why presidents use political appointees and how their choices impact government performance–for better or worse.

One way presidents can influence the permanent bureaucracy is by filling key posts with people who are sympathetic to their policy goals. But if the president’s appointees lack competence and an agency fails in its mission–as with Katrina–the president is accused of employing his friends and allies to the detriment of the public. Through case studies and cutting-edge analysis, David Lewis takes a fascinating look at presidential appointments dating back to the 1960s to learn which jobs went to appointees, which agencies were more likely to have appointees, how the use of appointees varied by administration, and how it affected agency performance. He argues that presidents politicize even when it hurts performance–and often with support from Congress–because they need agencies to be responsive to presidential direction. He shows how agency missions and personnel–and whether they line up with the president’s vision–determine which agencies presidents target with appointees, and he sheds new light on the important role patronage plays in appointment decisions.

The administrative state is the nexus of American policy making in the postwar period. The vague and sometimes conflicting policy mandates of Congress, the president, and courts are translated into real public policy in the bureaucracy. As the role of the national government has expanded, the national legislature and executive have increasingly delegated authority to administrative agencies to make fundamental policy decisions. How this administrative state is designed, its coherence, its responsiveness, and its efficacy determine, in Robert Dahl’s phrase, “who gets what, when, and how.” This study of agency design, thus, has implications for the study of politics in many areas.

The structure of bureaucracies can determine the degree to which political actors can change the direction of agency policy. Politicians frequently attempt to lock their policy preferences into place through insulating structures that are mandated by statute or executive decree. This insulation of public bureaucracies such as the National Transportation Safety Board, the Federal Election Commission, and the National Nuclear Security Administration, is essential to understanding both administrative policy outputs and executive-legislative politics in the United States.

This book explains why, when, and how political actors create administrative agencies in such a way as to insulate them from political control, particularly presidential control.