The Role of Experience & Emotions

Feminist pedagogy also breaks down the simplistic division of “classroom vs. real world” by involving the whole of one’s identity—student and instructor—in learning (Lal). Personal experience, for instance, is recognized as a valid and valued form of knowing. It doesn’t stand on its own as complete knowledge, but it’s also not seen as irrelevant or inferior. Instead, it works in conjunction with other forms of knowing. 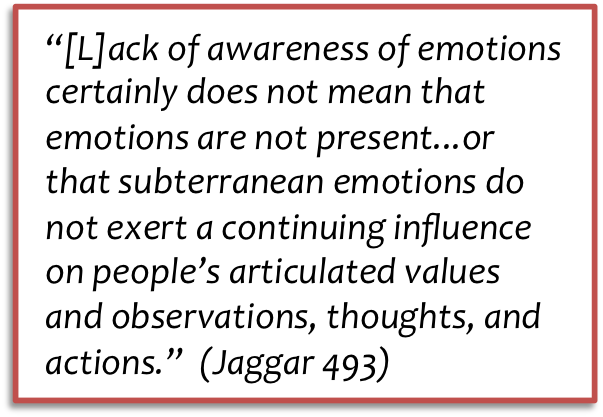 This integration of lived experiences means that emotions are also acknowledged as part of what it means to know and how we know. This is where feminist pedagogy breaks away from Freire’s critical or liberatory pedagogy, an approach otherwise related in its disruption of forms of domination. He embraced the Western view that rationality is the pathway to knowledge and thus, he believed, the best response to oppression: opinions and actions should be based on reason, not on emotions. However, this privileging of rationalism has “set up as its opposite an irrational Other, which has been understood historically as the province of women and other exotic Others” (Ellsworth 94). Alison Jaggar explains that the goal of becoming a “dispassionate investigator” governed solely by reason and logic simply confirms the “epistemic authority of the currently dominant groups” and falsely masks emotion as “inimical to the construction of knowledge,” when instead it’s “helpful and even necessary” (495, 487).

To have beliefs, values, and convictions is to have emotions, and thus emotion must be recognized in the classroom in order to  facilitate greater and more critical understanding. For instance, striving for equity and justice may lead to frustration, anger, stress, relief, joy, and pride. Identifying the relationship between experience, emotion, and action will help students bridge the classroom and the “real world,” the personal and the political, theory and practice.

It’s worth noting that, in an effort to resist simple all-or-nothings and either/ors, feminist pedagogy asserts that while perspectives, emotions, and resulting opinions are relevant to 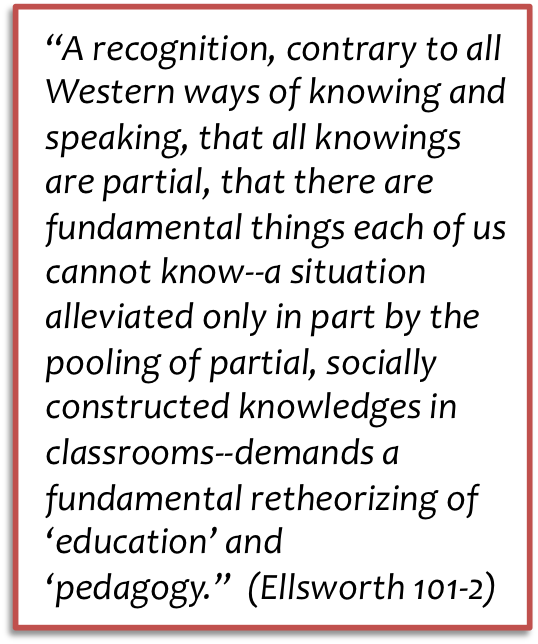 learning, they’re also understood as contextualized, limited, and bound to structures of power (Ellsworth). As such, feminist classrooms aren’t simply about uncritically sharing emotions but instead analyzing how they inform perspectives and actions (Ellsworth, Rabinowitz, Fisher).  The critical engagement of different and even conflicting experiences and perspectives results in richer knowledge, so a classroom goal is communicating [across] differences (Ellsworth 115).