The Complexity of Identity

Feminist pedagogy is committed to a nuanced understanding of identity that acknowledges, for instance, the differences between and among the students, between herself and the students, and between the class and the authors on the syllabus. This critical recognition of differences between and among people’s lived experiences (McLaren 43) leads us to believe in “equity-mindedness,” a desire for justice and fairness that’s attentive to the specific identities, histories, and needs of students within a specific context, rather than assuming that everyone in the classroom is the same, this view leads to (Peña, Bensimon, and Colyar 48).  Instructors informed by feminist pedagogy also address those identities and voices that are erased, silenced, absent, or otherwise excluded.

This approach to identity informs feminist pedagogy’s fundamental belief in the contextual and social nature of knowledge and the particular and partial standpoints that make up knowledge (Haraway 412-414). Additionally, this awareness of identity promotes students’ awareness of the positions that lie behind all knowledge. In other words, we strive to make it clear that knowledge is neither neutral or sterile.

The notion of “intersectionality” pushes our understanding of identity by taking into account the multiplicity obscured by the very concept of identity (Crenshaw 1242-1243). That is to say, an individual may embody various social positions which may be overlapping and variable depending upon context. All aspects of identity that relate to status, power, and authority are relevant to classroom interactions. Some of these identities include gender, ethnicity, race, sexual orientation, language, immigration status, age, ability, and religious affiliation.  While some identities are perhaps readily apparent (e.g., language), others must be revealed (e.g., sexual orientation, religious affiliation, or oftentimes, race).  Even identities that are not readily apparent may influence how an individual chooses to engage with others in the classroom or how she accesses the space of the classroom. 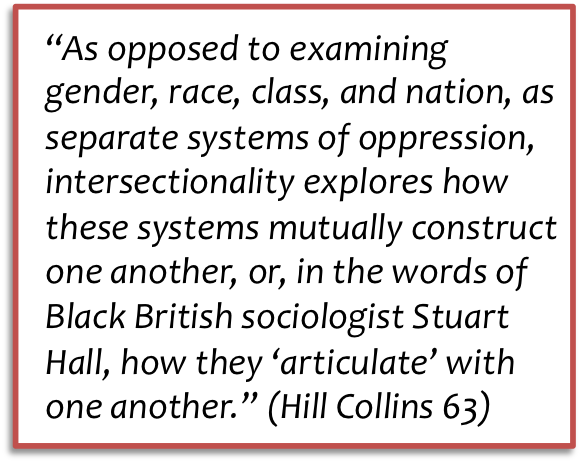 This valuing of identity often translates into content and course activities that explicitly address issues of identity and identity formation. This type of conversation involves intimacy and requires delicacy. Just as instructors choose what aspects of their identity to make explicit, the forcible “outing” or externalization of an identity that a member of the classroom has not chosen to share on her own should be avoided. While personal experience informs knowledge creation, a violation such as outing another detrimentally affects feelings of community, trust, and shared endeavor.

Failure to consider the role of identity allows existing social structures to operate without interrogation. Jerrie Cobb Scott refers to this as “uncritical dysconsciousness”—a term which defines a passive acceptance of society’s hierarchies as fixed and immutable (qtd in Highberg 58). The multiple identities that an instructor, her students, and the course texts bring to the classroom are always present and active. We strive to be as aware as possible of these identities. We believe that through awareness and recognition, we not only create a deeper sense of community and solidarity in the classroom but students also achieve a better sense of the world around them and the contingent nature of its truths.