The objective of this research is to understand the failure mechanisms of polyurea-coated structural systems when subjected to blast loads. Polyurea, a class of polymeric materials, exhibits outstanding properties in mitigating impact and blast hazard in structures. This research will result in the fundamental understanding of the mechanisms behind the blast resistance properties of polyurea-coated composite systems. This fundamental understanding is needed for innovation of advanced structural protection systems. Deliverables of the project include state-of-the-art computational models to predict the response of polyurea-coated composite system under blast loads, and structural and material designs for improved blast protection. The investigations will lead to better protection systems for global and national energy supply routes, such as oil and gas pipelines against natural disasters and terrorist attacks; civilian and military vehicles against improvised explosive devices, and ship hulls in the event of an under or above water explosion. Polyurea-steel composite structural systems will offer the advantages of low cost, and easy implementation to new and existing structures. 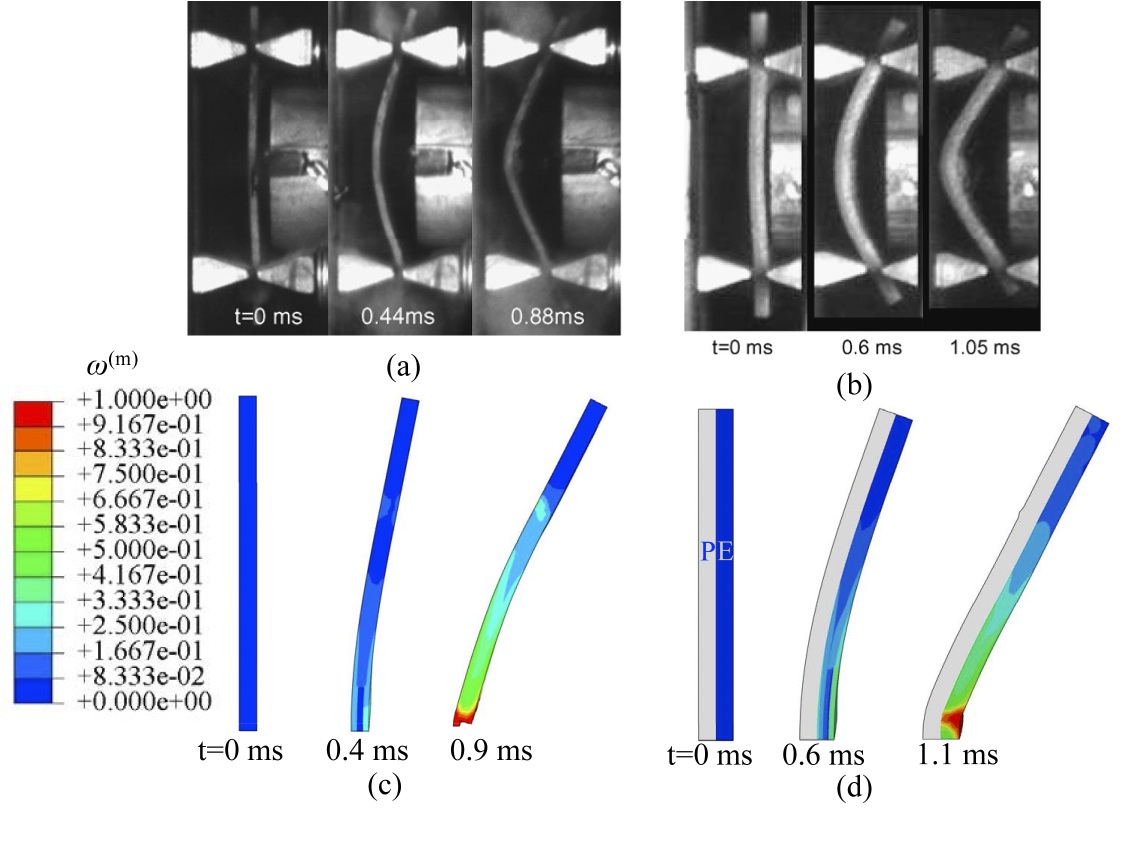 We are working on modeling oxygen ingress and oxygen ingress induced embrittlement in Titanium structures subjected to combined and extreme environmental conditions. A coupled thermo-chemo-mechanical multiscale computational framework is being developed to predict oxygen ingress due to thermal loads on the structure and effects of elevated oxygen content on the mechanical response.

The objectives of this project are (1) to devise a multiscale computational model capable of predicting the failure of composite aerospace structures subjected to cyclic loading conditions, and; (2) to understand the dominant failure modes within the composite structure including microconstituent (fiber or matrix) cracking, debonding along the fiber-matrix interfaces and delamination. We are developing computational models capable of evaluating the cyclic response of composites based on multiple spatial and multiple temporal scale modeling approaches. We are working with the Air Force Research Laboratory to calibrate and validate our models based on extensive experimental data and predict the response of aerospace structures subjected to cyclic loads.

Nano-reinforcements in cement composites have a tremendous potential in enhancing the performance of civil infrastructure systems from strength, energy absorption, and durability perspectives, in addition to opening the door for novel applications through multifunctional properties such as electro-magnetic field shielding, self-sensing capabilities and self control of cracks. Because of their advantages, nano-reinforced cement composites could have a transformative impact on future civil and military built infrastructure in a wide array of applications.

We are investigating the relationship between the chemical nature and the mechanical properties of the nano-reinforcement-cement interface. We are developing nanoscopically-informed mechanical interface response models that incorporates the interfacial chemistry. The multiscale computational model as well as the fundamental understanding of the interface will provide the building blocks that enable molecular-level material design, allowing a shift from traditional engineering materials to composites tailored for superior performance. 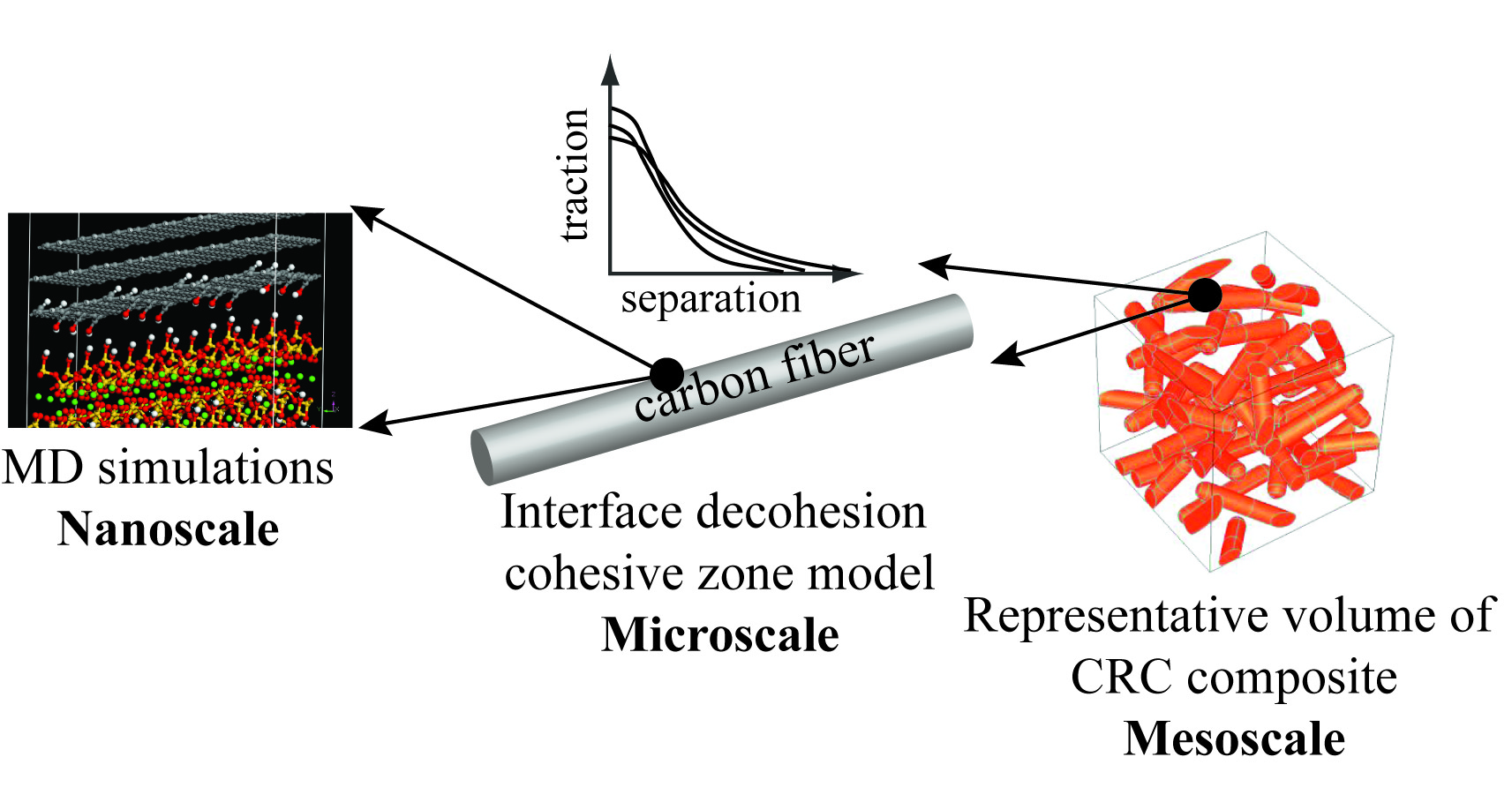 The objective of this research is to reduce the prohibitive computational cost associated with the mathematical homogenization of polycrystalline materials. Eigenstrain based representation of the inelastic response field is employed to approximate the microscale boundary value problem using an approximation basis of much smaller order. The reduced order model takes into account the grain-to-grain interactions through influence functions that are numerically computed over the polycrystalline microstructure. The proposed approach is also endowed with a hierarchical model improvement capability that allows accurate representation of stress and deformation state within subgrains. Two orders of magnitude efficiency is achieved compared with computational homogenization, which allows accurate macro analysis of polycrystalline structures.

The objective of this research is to understand the deformation and failure mechanisms Nickel-based super alloy Inconell 617, which is a candidate structural material for very high temperature reactor (VHTR) intermediate heat exchangers. In the collaborative project, we aimed at developing a experimentally validated microstructure-based creep fatigue model, to investigate the creep-fatigue interaction and ultimately achieve the life prediction capability. To achieve this goal, crystal plasticity constitutive laws are used to characterize the dislocation slip of the grains while cohesive zone models are adopted to capture the intergranular damage, both of which are incorporated into a finite element framework on fully discretized statically representative microstructures.