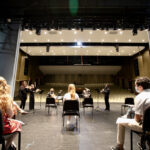 Wexner Foundation Blog, March 15, 2016. Purim is a festival of inversion, a time when the lowly are honored, the esteemed are mocked, the serious is parodied, and the forbidden is â for a moment â permissible. Â By turning things upside down for a day, Purim reaffirms what right-side-up should look like. It is only…

Posted by kelnersj on March 15, 2016 in Media, pedagogy, religion, ritual

This December 2015 blogcast sponsored by the Consortium for Applied Studies in Jewish Education focuses on travel as a form of Jewish education, ethical engagement and community-building. Click here to view.

From the Brandeis University Mandel Center’s blog, “Learning about Learning”, Jan. 6, 2015: The Zohar may seem an unlikely text to use for the first session of a 100-level Introduction to Jewish Studies class. I chose to open with it, however, for three reasons…Â  Continue Reading Â»

Posted by kelnersj on January 6, 2015 in Media, education, pedagogy

Reshaping the World Through Vision, Activism, Ideas and Initiative (Not Demography)

Wexner Foundation Blog, May 22, 2014 I have now seen several rounds of brouhaha over Jewish population surveys: 1990, 2001, and now Pew 2013. One would think that the conversation would advance each decade. This is social science after all; time marches on and we build our knowledge cumulatively, on the shoulders of giants as…

A Lexicon in Flux

Shâma February 2010, Issue no. 666: Do-it Yourself Judaism This new creative enterprise that has been variously referred to as start-ups, emergents, and the innovation ecosystem is now being called DIY, Do-It-Yourself, a term with roots in the subculture of punk music. Drawing on the lexicon of punk rock offers an important counterbalance to a…

The Jerusalem Post June 28, 2010 When Birthright was launched a decade ago, skeptics dismissed the 10-day tours of Israel as little more than a free party for privileged college kids. It was an unfair critique, but it gained traction because it combined the ever popular lament about the âyouth of todayâ with an equally…

So Near, So Far

A travelerâs quiz: When American Jewish tourists arrive at Israelâs Ben-Gurion Airport, which two words are they more likely to be greeted with?

The Place of Cultural Production

Shâma June 2007, Issue no. 642: Place, Space, and the Shaping of American Judaism From Congregation Bânai Jeshurun to Heeb Magazine, New York is producing a new urban Jewish culture defined through shelilat haparbar, the ânegation of the suburbs.â But can a culture defined in opposition to the suburbs revitalize Jewish life there? Read moreâ¦