The basic idea is the Pirates struggling right now and whether the city of Pittsburgh has any obligation to step in or what, if anything, can be done about their situation.

I have three questions I was hoping you could answer, if you didn’t mind.

1. Do professional sports franchises that have built stadiums using public money have any sort of responsibility to the city in which theyâre based to spend enough money to field a competitive team? Why or why not?
Â

The split of financial risk between the stadium authority and the team depends on the conditions of the original stadium lease/funding agreement (15/85 private/public for Pirates).

Unfortunately, when faced with the extortion threat of franchise relocation public stadium authorities usually agree not only to assume a disproportionate share of the upfront venue cost, but almost always agree to assume almost all of the future project risk, including the revenues derived from the uncertain quality and performance of the team on the field.

2. If this happens, do governmental leaders have any obligation to police it?

There is some historical precedence (and success) for season-ticket holders to sue the home-team for failure to perform between the lines. The legal/economic basis is the argument (fact) that the season-ticket is an implicit contract renewable between team and season-ticket base for the club to provide superior team-performance above ticket price expectations in exchange for the season-ticket holders enduring perennial inferior team production below ticket price expectations. If the team is perennially inferior then the club has failed to perform its side of the deal. 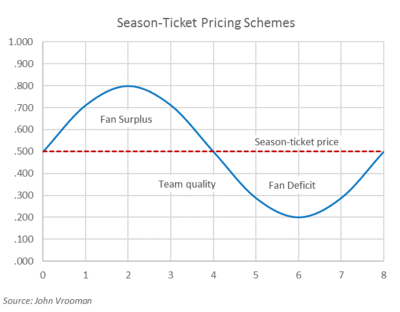 Â
Short run solution: The perennial failure to perform argument used by theÂ season-ticket base could be adapted to fit the implicit contract between the public authority and the under-performing team. This is especially true during the recent “money-ball” tactical period of quality low-ball teams being rebuilt, and rising from the ashes of self-induced mediocrity and even borderline bankruptcy.Â Â (See the Houston Astros for example).

3. When you look at sports, do you think itâs enough for a fan to see players on the field or court trying? Or should fans expect to see honest effort from those above? If so, to you, what does that look like?
The classic social welfare/economic argument for shifting performance risk to the public authority is that the public authority is better suited to absorb the future venue risk hit because it can be diversified among a myriad of other public projects, rather than being absorbed by the private business (MLB club) alone. As a result of the net risk reduction, the public funding of a private business isÂ (in theory)Â a positive-sum move for the local economy .
Â
This risk-reduction justification, however, doesn’t necessarily hold for a revenue sharing monopoly sports league that is almost perfectly diversified (negatively correlated performance) because the teams are pooling revenue with their opposition.Â (MLB is now over 50/50 league/local revenue).Â
Long term solution: Teams should absorb upfront more risk in the original lease-agreement and/or build their own ballpark (Pirates should be invested at least 50/50 instead of 15/85 private/public). In the case of a sports league the performance-revenue risks can easily be shifted to rest of the league through upfront venue cost/risk sharing, simply by deducting home ballpark costs from revenue sharing base in exactly the same proportion that the rest of the league derives revenue from the team’s home market.
Â
JV