Iâm a regular reader of Prof. Vroomanâs blog and was wondering if he might have a few minutes today (Tuesday) or tomorrow to talk about the current state of the NFL from an economic perspective.

I was hoping to get Prof. Vroomanâs take on the possibilities and challenges facing the NFL, from the rebound in TV ratings over the last couple of years, to the current negotiations over a new collective bargaining agreement, to longer-term concerns such as declining youth participation in football. 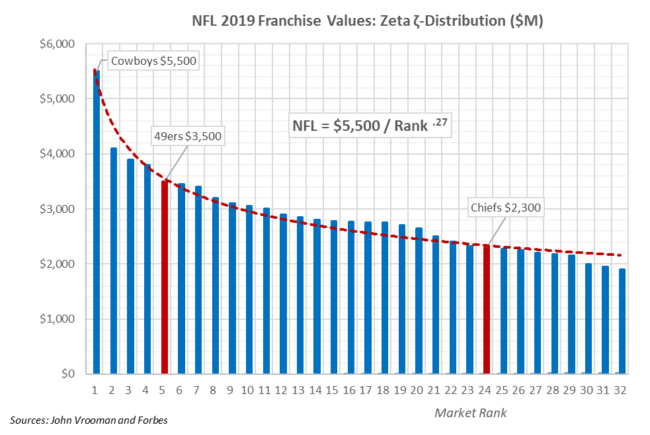 I had not encountered some of your older posts and enjoyed reading them. They answered many of my questions. A couple of queries, though, still linger and, if you have time, I would very much appreciate your insights.

1)Â Â Â Â Â Â As you pointed out (in your wonderfully named League of Ordinary Gentlemen post), any serious challenge to the NFL would have to take on at least five sources of league power. Assuming that is unlikely, I wonder what lies ahead for the league given its saturation of the U.S. market. A slow growth future? Or a new boom in revenue supported by legalized gambling and international expansion? Â In short, how close do you think we are to peak NFL?

2)Â Â Â Â Â Â I recall reading your 2011 paper on the economic structure of the NFL (which I canât find now in an ungated version)Â  and being struck by the big rise you documented in team-specific venue revenue. Has that trend continued? If so, does the disparity in stadium revenues threaten the share-and-share-alike structure of the league?

The $100 billion NFL is the most valuable sports league in the world with annual revenues of $15 billion.

In a metaphorical way the historical evolutionary struggle between the shared and unshared wealth of the NFL and its member clubs reflects the dialectical tension between individualism and collectivism now so apparent in Western democratic society. In either case, there is no extremely unique solution or absolutely perfect political blend.

The key to survival in each case is the awareness and political flexibility to recognize and respond to underlying interaction between the driving forces of technological change and the resistance of cultural ceremony. The individualistic goal of the game is to blow your opponent away, but because of the joint nature of the game, any team in the League is ultimately only as strong as its weakest opponent.

âTrumpÂ is probably blowing smoke and his bid will not be treated seriously. As previous owner of the New Jersey Generals, Trump won an antitrust suit in USFL v. NFL and was awarded $1 in damages. This league has a long memory.â

— Vrooman in the Toronto Star

The monopoly/monopsony NFL cartel will always seek its elusive maximum profit peak (as if by Continental Drift), but it will always fall short of the socially optimal product. Systematically fans will be charged twice the competitive price and players will be paid half of their worth. That is the fundamental flaw of a politically protected natural monopoly/monopsony cartel like the NFL.

From my paper on Economic Structure of NFL:

(use this link if needed in your article)

âSports leagues are unique in that individual clubs are mutually interdependent in their cooperative production of competitive games. As joint members of natural cartels each sports team is only as strong as its weakest opponent. Over the last halfcentury the National Football League (NFL) has become the most economically powerful sports league in the world largely because it has also been the most egalitarian.â

âOver the last 2 decades, however, a major threat to league-thinking solidarity has emerged from an individualist counterrevolution in unshared venue revenue. During the luxury-seat stadium building frenzy that followed the watershed 1993 Collective Bargaining Agreement (CBA), the proportion of team-specific venue revenue has doubled from 10 to 20% of total revenue. This once-tight syndicate now finds itself split into those teams with new venues and those without.â

and i like this one with SI that is directed more toward your specific futuristic q’s: