How It Works, II

This is the second of four posts about how mindfulness works, or the documented effects and how they occur.  Last week was devoted to attention regulation; this week explores the increased body awareness, the ability to notice small, subtle changes and sensations in the body.

I was thrilled when I learned the term “proprioception,” or our ability to sense the body and its movements in relation to the environment around us. I was deep into yoga at the time, and it gave me language (clunky, but useful) for something I found myself thinking about all the time–but had rarely noticed before.  Now, I’m learning “interoception,” our awareness of our internal sensations, like hunger, butterflies, pain, temperature, itch, and so on.  This sense isn’t as new to my thinking as proprioception, but I’ve noticed I’m aware of and using it more often these days.

This may seem counter-intuitive as as a goal:  why would we want to be more aware of pain? Butterflies? That itch we can’t reach?  Hot flashes?  As proprioceptive awareness changed my relationship generally with my body-in-the-world, interoceptive awareness is actually improving my experiences of pain, nervousness, etc.  The studies on this “mechanism” of mindfulness offer an explanation:  in their review of two decades of research, Hölzel and colleagues (2011) found plenty of evidence showing an increased awareness of the body as a body.

People who practice mindful meditation report that they more easily and immediately notice sounds, smells, tastes, sights, and interoceptions, as well as thoughts and emotions–a heightened state of all perception.*  Neuroimaging has shown that mindful meditation activates the part of brain (temporo-parietal junction) that regulates “the first-person perspective of bodily states” or “embodiment” (p. 542).**  This response is tied to the remaining mechanisms of mindfulness, but they’re all interrelated, so this preview of later posts is necessary. Instead of my old reaction to getting an IV (<suffer>”Ouch! Wah.”</suffer>), my recent surgical prep sounded more like <notice>”Ah, yes, my hand is experiencing pain from the IV”</notice>. That is a significantly different experience. The sensations in my hand are in my hand and nowhere else–including my sense of self or my identity.  (This part will be more clear in two weeks.)

An additional consequence of this increased bodily awareness previews next week’s topic of emotional regulation, but begins in the body:  “An increased awareness of the body’s response to an emotional stimulus might thus lead to greater awareness of one’s own emotional life, in turn, an awareness of one’s emotions is a precondition for being able to regulate those emotions” (p. 542).  For instance, last week I was nervous before guest teaching a class.  In addition to a few mental worst-case scenarios, I could feel my anxiety in my stomach, in my pulse, and in my breathing.  Rather than trying to ignore it (does that ever work?) or letting it escalate, I focused on one of my body’s responses, the one I knew I could change: my breathing.  A few slow breaths with a particularly long exhale quieted my butterflies, slowed my pulse, and calmed my proverbial nerves. Awareness of and changing my bodily response affected my emotions, and I had a great time in the class.  But I had to be keenly aware of how my body was responding to the situation, rather than focused on the panicky images swirling around in my head. 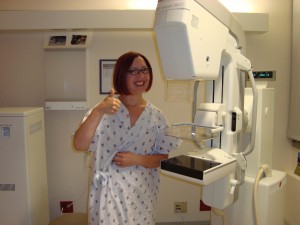 Mindfulness as Your Personal Mammogram Machine (Hat tip to The Sonia Show for image.)

Oh, to again celebrate Breast Cancer Awareness Month, here’s a simile to capture this ability:  mindful practice is like having a mammogram whenever you like, but without the discomfort.  (Okay, that’s a major distinction, but ultimately, all metaphors and similes somehow lie.)  In other words, it’s all about early detection and thus prevention. Increased body awareness helps us notice those physiological partners–even predecessors–to our emotions, and we can reframe these responses to a) regulate some of them and b) experience them in less personalized ways.

I had previously posted a few body scans.  Here are a few more–this time from UCLA’s Mindful Awareness Research Center.  The goal is simply to help you check in with your body, to experience it part by part and as a whole more fully.  It’s also incredibly relaxing. Scroll down to listen to them in your browser or in iTunes.

—
* In the absence of a good instrument, this body awareness hasn’t yet been documented in behavioral studies.  Thus far, meditators’ awareness of body sensations has been tested by their sensitivity to their heartbeats. These studies found no increase in awareness of their heartbeats, but Hölzel and colleagues note that “awareness of heartbeat sensations is not emphasized during mindfulness practice and thus may not be the best index of the awareness cultivated by the practice of mindfulness” (p. 541) and encourage studies using alternative measures.

**  This is also the same area of the brain that governs empathy and compassionate behavior.  Read my earlier post “Playing with Others” for more on this effect.
—

This entry was posted in News and tagged awareness, body scan. Bookmark the permalink.