Looking into the Fire

In preparation for a talk next week, I was sitting on my floor next to my bookshelves, surrounded by open volumes of literature. (This is the literary scholar’s version of a kid surrounded by unwrapped presents.) I got sidetracked as I revisited one of my favorite passages in one of my favorite novels. It turns out that some of the literary moments that formed my understanding and appreciation of literature prefigure this blog. 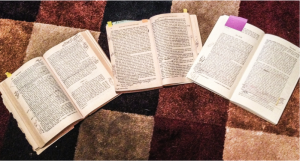 Some of my most annotated (aka, loved) books: Moby-Dick, Hawthorne's Collected Stories, & Walden

In Herman Melville’s Moby-Dick (1851), Ishmael describes being on duty monitoring the pots of burning whale oil to fuel the Pequod. He becomes mesmerized by the fire, fearing the visions of “fiend shapes…capering half in smoke and half in fire,” which then “begat kindred visions in my soul” (354). He warns us, “Look not too long into the face of the fire, O man!” In Nathaniel Hawthorne’s short story “Ethan Brand” (1852), the titular character is a lime-burner who lived a “solitary and meditative life” monitoring the kiln fire, until one night he threw “his dark thoughts into the intense glow of its furnace, and melted them, as it were, into the one thought that took possession of his life” (422).  This moment is the beginning of his obsessive search for the Unpardonable Sin, which he ultimately finds in his own heart, not others’.

As these parallel scenes suggest, Hawthorne and Melville shared a legendary friendship that began around the time these two pieces were published. These are no minor scenes, though: they are significant passages within their bodies of work, pointing to their larger beliefs about both human nature and the world.*

Shortly after these two texts appeared, Henry David Thoreau’s Walden (1854) offered a similar scene, but with a very different result. He describes fishing at night on his ponds:

“It was very queer, especially in dark nights, when your thoughts had wandered to vast and cosmogonal themes in other spheres, to feel this faint jerk, which came to interrupt your dreams and link you to Nature again. It seemed as if I might next cast my line upward into the air, as well as downward into this element, which was scarcely more dense. Thus I caught two fishes as it were with one hook.” (117)

Water and air, instead of fire. Visions of nature and the expansive self,** instead of “fiend shapes” and “dark thoughts.” But transcendent experiences while privately meditating on one of the elements.

I’ve always loved–loved–these passages, well before I knew anything about meditation or mindfulness.  I invoked them again and again in various papers I wrote in college and graduate school. And now they come back to me again, with another layer of significance. In the darkest times of my life, I resisted anything akin to meditation–or sitting quietly, allowing thoughts to come and go–for fear of what thoughts would come but not go.  At other times, like now, I understand Thoreau letting the line out and catching more than he expected.***

This week, my practice pays homage to these three passages.  I have many candles that I typically neglect, so I decided to look into and reclaim fire from Ishmael’s and Ethan Brand’s darkness. 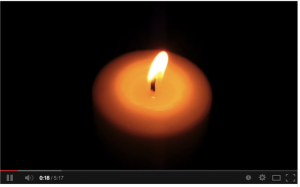 If you have one, use a real life candle.  If you don’t have one nearby, click the video to the right. (Yes, it’s just a silent video of a candle burning. Oh, Youtube….)  Here’s some good guidance on “How to Do the Candle Meditation“:

“…simply stare at the candle and allow the image of the flame to occupy your mind. At first, your mind will probably wander about and your eyes will resist your efforts to keep them still. This is normal and it will gradually ease as the meditation progresses, so don’t be too concerned if this happens to you.

You may also find that you eyes water a little. Again, this is normal and it usually dissipates quite quickly. If distractions like these arise, simply return your attention to the candle flame and let them go.

A great way to deepen a candle meditation is to imagine that you are breathing the light of the candle in and out of yourself. You don’t need to perform a complex visualization exercise to do this, just keep your eyes fixed on the candle flame, and allow your natural breathing rhythm to fill your awareness.

Casually sense that the light of the candle is flowing into you as you breathe in and out.”

—
* Hawthorne and Melville were what we call Romantics, or more precisely Dark Romantics.

** Thoreau was a Transcendentalist, a more optimistic form of romanticism.

*** Let’s all try to use the word “cosmogonal” in conversation this week.  Why is it not more common?  Especially with Cosmos back on TV, it shouldn’t be too hard.

This entry was posted in News and tagged candle, literature. Bookmark the permalink.