My Women & Gender Studies class talked about “slut shaming” recently, and I’ve since been thinking about another kind of shaming that worries me–and that I want to be careful to avoid. The flurry of popular media discussions of mindfulness (and other topics) have been accompanied by concerns about how busy every one is.  Absolutely.  However, at the same time, there’s an undercurrent of “busy shaming” that’s worth calling out as clearly as the criticisms of busyness itself.

Last Friday, Rosa Brooks responded to Facebook COO Sheryl Sandberg’s 2013 book urging working women to “lean in,” or assert themselves more and “push through” whatever obstacles they face. Both praise and criticisms of the book have been many, spotlighting what’s useful (e.g., new images of working women) and what’s not (e.g., dismissing the effects of systemic gender bias).  In “Recline! Why ‘leaning in’ is killing us,” Brooks recalls her feelings of shame about her college days of “leaning back on my sofa, with a good book and a nice cup of coffee,” rather than taking leadership roles.  And so she leaned in, worked hard, works harder, enjoyed the rewards, and became exhausted. The pressure toward “ubiquity” (being available, plugged in, working all the time) is “killing us,” she says.  “No one can survive” working 24/7 in one job and then picking up the “second shift” at home. She concludes,

“When a workplace is full of employees who always lean in and never lean back, it’s full of employees who are exhausted, brittle, and incapable of showing much creativity or making good decisions…. If we truly want gender equality, we need to challenge the assumption that more is always better, and the assumption that men don’t suffer as much as women when they’re exhausted and have no time for family or fun. And we need to challenge those assumptions wherever we find them, both in the workplace and in the family.”

Yes yes yes!  In addition to arguing for a more nuanced understanding of work, work-life “balance,” gender dynamics, and power, she’s urging us to embrace a more mindful life that includes the “psychic space” and “time for the kind of unstructured, creative thinking so critical to any kind of success.” In fact, her call to “recline” might be translated as “butt on cushion!” (mindful shorthand for “sit, breathe, be here now, meditate”).*

However, despite her best intentions, Brooks (like many others) is on the threshold of making those who work hard (for whatever reason) feel bad about themselves, as if they are individually the problem, harming their colleagues, peers, and friends. Throughout, she says, “I hate Sheryl Sandberg.” That bothers me for a few reasons, not the least of which is because I resist the ways people (girls and women especially) are encouraged to compete with and “hate” each other: rather than turn our critical lens outward to the larger societal systems that create the conditions that we “hate,” we merely turn sideways and resent the individual people right next to us. (See my old newspaper column that explores this idea of women in the workplace more.)

Tim Kreider crosses that threshold of “busy shaming” in “The ‘Busy’ Trap,” published in The New York Times a year and a half ago but recirculated recently as part of this discussion. He says that the claim to be “busy” is “a boast disguised as a complaint,” “histrionic exhaustion,” that’s “self-imposed” resulting from “their own ambition or drive or anxiety, because they’re addicted to busyness and dread what they might have to face in its absence.” At one point, he offers “it’s something we collectively force one another to do,” but it’s a brief and unique admission in a 1,700-word essay, and he immediately turns the criticism back to the busy: “obviously your life cannot possibly be silly or trivial or meaningless if you are busy, completely booked, in demand every hour of the day.”

I’m all for distinguishing between being busy for busyness’s sake and productive, encouraging slowing down, rest, and attending to here and now. But these criticisms are oversimplified sleights of hand misdirecting our frustration and resentment toward people who instead deserve compassion. In our efforts to be mindful, let’s not assume that “others” are mindless–or worse. Let’s look closely at the sources of the problem rather than blaming the victims. 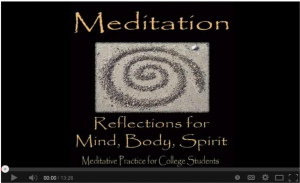 A loving kindness practice in the Meditations for College Students from the University of New Hampshire's Health Services.

I used to be one of these people, and I care a great deal about plenty of people who are still struggling with overwhelming work- and life-loads–all for complex reasons.

This week, then, I’d like to return to the “loving kindness” meditation that encourages connectedness and compassion. Click the image to the right, and wish the busy people in your life well:  May they be well.  May they be happy. May they be peaceful. May they be loved.

—
* I’m aware that all of this post can easily be rephrased to focus on students, for they may be the most busy (and stressed) among us–and with good reason.
—

This entry was posted in News and tagged be here now, busy, lovingkindness. Bookmark the permalink.