Last week, I had a great conversation about class participation with SoTL Scholar Hasina Mohyuddin and my Graduate-Teaching-Fellow partner in teaching the SoTL Scholars Program Andrew Greer (both PhD candidates in the Department of Human & Organizational Development).  I also serendipitously asked my students to work together to create a class rubric for assessing participation.  Since then, I’ve been thinking about the body language of paying attention. I’ve always wanted my students to–at the very least–make eye contact with their classmates and me when one of us is talking. But this conversation led by Hasina and a few things my students pointed out remind me that active listening isn’t monolithic, and eye contact isn’t the best way to gauge attention in class.*

Then, the most recent CBS Sunday Morning aired a story called “The Higher Purpose of Doodling” in which an asset manager describes his reasons for doodling in meetings:  it was “a way of staying engaged in the meeting,” rather than “checking out.”  Interviewer Lee Cowan cites the study “What Does Doodling Do?” (Andrade, 2010) in which doodlers demonstrated 29% greater recall than those who just took notes on lined paper. Andrade concludes that doodling is different from other “dual task situations” in which attention is divided and thus diminished (p. 100); in other words, the research on multitasking** doesn’t apply here.  Cowan then asks CUNY philosophy-of-psychology professor Jesse Prinz, “Do you want kids to be doodling while you’re lecturing?” Prinz answers, “Absolutely. Absolutely.” He describes it as “a way to take all those things that distract you, all those subjects that you ruminate on, and [clear] them away and [open] the space where information can get in…. Doodling is the attentional sweet spot.”

I’ve never been a doodler, but I love knitting for precisely the reasons described above. My skills are questionable, and that’s okay:  for me, it’s all about the process, more than the product. (See some of my products in the picture below.)  In fact, I sometimes knit a simple square pattern, unravel it, and start over. I sometimes knit while sitting in meetings, watching TV or movies (if it’s not essential that I watch), participating in book clubs, and the like. I sometimes just sit on my couch and knit, which is even more meditative less relevant to attentive listening.  In Mindful Knitting, Tara Jon Manning says the activity can afford knitters 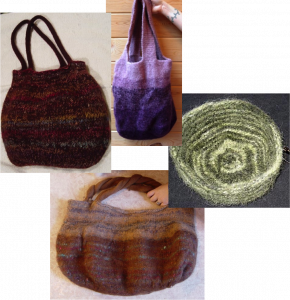 quality of deliberate focus–also referred to as bare attention…an intense form for paying attention…. These motions become automatic, drawing attention to the next level. You can start to incorporate a wider perspective, including the drape of the fabric you are making, the interaction of the colors and textures within the yarn, and the essence of what or for whom you are knitting. (2004, p. 17).

I suggest adding to her list of “wider perspectives” you can “incorporate” while knitting that of  keen attention to what’s going on around you at the present moment–like the classroom.

This week’s practice?  Doodling. Or knitting.

Caveat! To avoid giving the wrong impression, teachers should explain to students [and perhaps even more importantly, vice versa] why they’re doodling, citing the study above.

If you’re a knitter and in a context where you need to listen but not take notes, try knitting–but again, inform other participants as appropriate because meeting-knitters can be misinterpreted as bored, checking out, or expressing resistance.  While I love the notion of knitters-as-protestors, it’s better to educate those around you that the act is helping you listen more effectively.

* There’s also the complexity of eye contact norms in different cultures, which makes our unspoken expectation problematic.  I should also clarify that, during class discussions, I still want my students to make eye contact with each other as much as they can, or offer some other clear gesture of recognition and listening. Students deserve the most explicit gestures of attention when they risk speaking up. I still worry that classmates looking down and not at the student speaking may inhibit participation for some.  Such interactive discussion requires a very different dynamic from true lecturing, which seems more appropriate for doodling with the goals of active listening and note-taking.

** Oops, I realize I had mentioned multitasking in a previous post with the note that I’d “write more about multitasking soon, but in the meantime, this NPR story and this brief summary of the research will explain how it doesn’t serve us well in most situations.”  I’ll add multitasking to my list of upcoming posts.

This entry was posted in News and tagged attention, doodling, knitting, listening. Bookmark the permalink.