The choice of surface template plays an important role in cross-sectional subject analyses involving cortical brain surfaces because there is a tendency toward registration bias given variations in inter-individual and inter-group sulcal and gyral patterns. In order to account for the bias and spatial smoothing, we propose a feature-based unbiased average template surface. In contrast to prior approaches, we factor in the sample population covariance and assign weights based on feature information to minimize the influence of covariance in the sampled population. The mean surface is computed by applying the weights obtained from an inverse covariance matrix, which guarantees that multiple representations from similar groups (e.g., involving imaging, demographic, diagnosis information) are down-weighted to yield an unbiased mean in feature space. Results are validated by applying this approach in two different applications. For evaluation, the proposed unbiased weighted surface mean is compared with un-weighted means both qualitatively and quantitatively (mean squared error and absolute relative distance of both the means with baseline). In first application, we validated the stability of the proposed optimal mean on a scan-rescan reproducibility dataset by incrementally adding duplicate subjects. In the second application, we used clinical research data to evaluate the difference between the weighted and unweighted mean when different number of subjects were included in control versus schizophrenia groups. In both cases, the proposed method achieved greater stability that indicated reduced impacts of sampling bias. The weighted mean is built based on covariance information in feature space as opposed to spatial location, thus making this a generic approach to be applicable to any feature of interest. 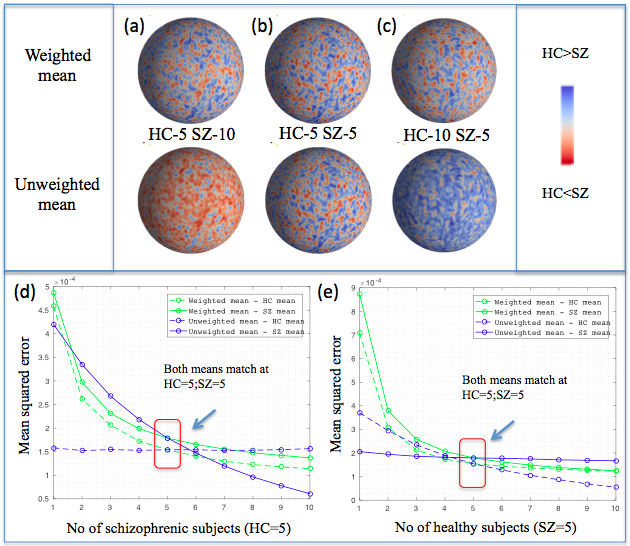