Diffusion weighted magnetic resonance imaging (DW-MRI) represents an important method of studying local brain tissue microarchitecture and structural connectivity. Interpretation of DW-MRI is challenging due to patient movement, imaging artifacts, and non-linear estimation processes. Importantly, inter-site consistency is difficult to achieve due to hardware variation and imaging parameter differences. The current state-of-the-art preprocessing for DW-MRI includes susceptibility distortion correction and eddy current-induced distortion correction. However, this process does not account for temporal instabilities in the MRI system or gradient nonlinearities; both of which impact diffusivity and anisotropy measurements. Signal drift correction can be used to resolve these issues and address temporally and spatially varying drift [1]. Additionally, the estimation of gradient nonlinearities to correct b-value and gradient direction [2] has been proposed. Herein, we focus on an extended preprocessing pipeline that folds in these techniques along with current standards. For analysis, an ice-water diffusion phantom has been scanned and processed. These techniques are being made available in open source. We scanned an HPD 128 diffusion phantom consisting of 13 vials of varying concentrations of polyvinylpyrrolidone with known mean diffusivity (MD) values at zero degrees Celsius. The acquisitions were performed across two sites with varying b-values and numbers of gradient directions. Images with a b-value of zero were intermittently acquired within each scan to allow for a signal drift model to be fit and applied for correction. Field maps have been acquired at each site and are used to estimate the gradient non-linearities. Using fsl’s topup [3] and eddy [4] four pipelines are evaluated: 1. topup and eddy (“TE”); 2. topup, eddy, and signal drift correction (“TES); 3. topup, eddy, and gradient field correction (“TEG”); and 4. topup, eddy, signal drift correction, and gradient field correction (“TESG”). MD and fractional anisotropy (FA) have been generated after each pipeline for each scan. The error in MD has been calculated as the absolute difference between the observed MD and the known MD. We used Wilcoxon non-parametric tests to assess differences. Signal drift correction in pipelines TES and TESG lead to a decrease in the MD error (p<0.05) and the gradient field correction in pipeline TEG and TESG lead to a decrease in FA error. The benefits of the two correction steps are additive with TESG leading to lower error than TES or TEG in FA and MD respectively (p<0.05). 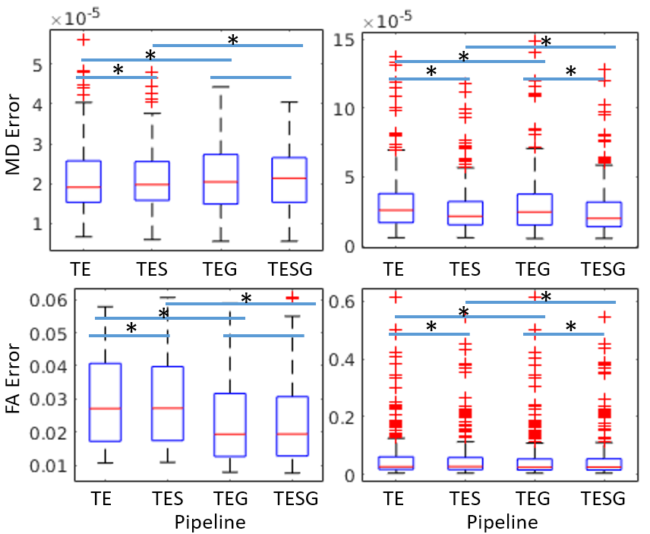