Joint independent component analysis (jICA) is a common data-driven approach for integrating electroencephalography (EEG) and functional magnetic resonance imaging (MRI) data. It is often used for hypothesizing joint electrical and hemodynamic neurological phenomena. The applicability of this approach to other types of multimodal neuroimaging data remains largely unexplored. We present a preliminary study performed on T1 and diffusion weighted MRI data from the Baltimore Longitudinal Study of Aging to demonstrate that this approach can be applied to cortical surface and structural connectivity metrics. We calculate 588 region-based cortical metrics and 4,753 fractional anisotropy-based connectivity metrics. We project these metrics into a low-dimensional manifold with principal component analysis (PCA). We perform jICA on the manifold and subsequently backproject the independent components from PCA space to the original data space. We demonstrate component stability with 3-fold cross validation and find differential component loadings between 776 cognitively unimpaired control subjects and 23 with Alzheimer’s Disease (AD) that generalizes across folds. In addition, we perform the same analysis on the surface and connectivity metrics separately and find that the joint approach identifies both novel and similar components to the separate approaches. To illustrate the joint approach’s primary utility, we provide an example hypothesis for how surface and connectivity components may vary together with AD. These preliminary results suggest jointly varying independent cortical surface and structural connectivity components can be consistently extracted from MRI data and provide a data-driven way for generating novel hypotheses that may not be captured by separate analyses. 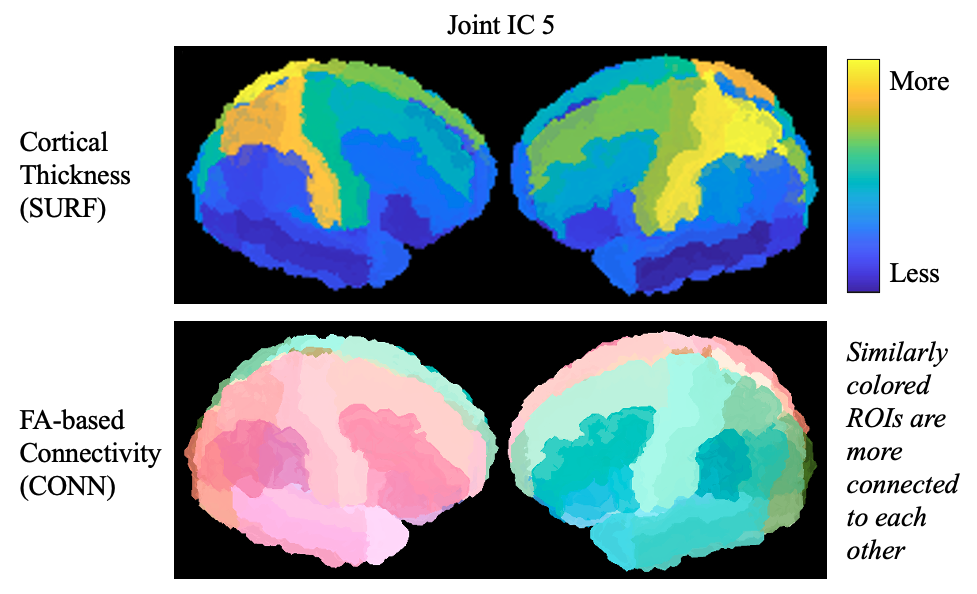 Figure 5. Example of a hypothesis that can be generated with the joint approach. Joint IC 5 is a candidate for differential loading between control subjects (lower loadings) and those with AD (higher loadings). Visualization of a selected SURF metric (cortical thickness) and the CONN metrics from joint IC 5 suggest a hypothesis that can be generated from this approach is that AD is associated with decreased frontotemporal cortical thickness and inter-hemispheric structural connectivity.